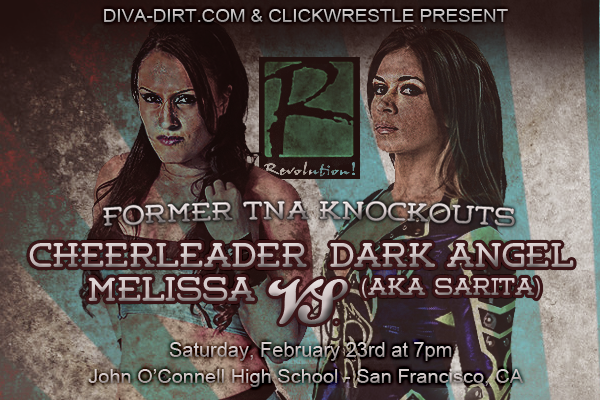 Two former TNA Knockouts will do battle this weekend for Pro Wrestling Revolution in San Fransisco, with the artist formerly known as Sarita (now being billed under her previous alias “Dark Angel”) taking on Cheerleader Melissa.

The match, in association with Diva Dirt and ChickFight, will be for the vacant PWR Women’s Championship.

The show will take place on Saturday, February 23rd at the John O’Connell High School. Bell time is 7pm.

These two are no strangers, having wrestled each other several times in tag team action during their TNA days. While wrestling for SHIMMER, Sarita (then billed by her real name Sarah Stock) defeated Melissa in her debut on Volume 11. Melissa would eventually repay the favor on Volume 18.

If you’re not going to be in San Francisco, but are interested in seeing the match (and why wouldn’t you be?) you’ll be able to purchase the match exclusively at ClickWrestle.com.

In other Sarita news, she recently joined Twitter as @SSDarkAngel. Drop by and wish her luck (or bad luck) against Melissa!