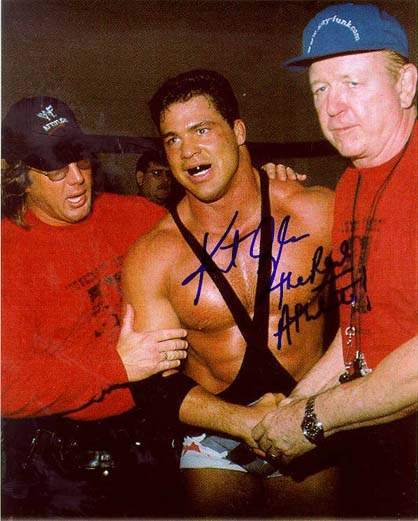 Funk’s Corner
Do Your Best and Don’t Quit

I had trained Jumbo Tsuruta, a Silver Medalist, Anton Geesink a Judo Gold Medalist, Mark Henry Olympic Weight Lifter and Giant Silva an Olympic Basketball Player. I believed that real wrestlers and real athletes are important to the credibility of professional wrestling. My father was an amateur wrestler from Indiana University and he had insisted that I compete in amateur athletics before turning pro.

Our routine was weights in the morning followed by in ring performance at the WWF studio in the afternoon. Kurt couldn’t wait to get to the ring. He was happy to be there and loved training.

The first thing I told Kurt was that anything he did in amateur wrestling he could work into his professional wrestling career Kurt executes the best pro fireman’s carriage in wrestling.

Kurt is an exceptional athlete. I was a fan and Coach of Kurt Angle and respected him for his accomplishments in amateur wrestling so you can imagine how good I felt after our first practice session when Kurt looked and me and said, “Hey Coach, this sport, is hard work, and I love it.”

These are the words of Kurt Angle, 1996 Gold Medalist and, “Blue Chipper,” in the WWF Funking Dojo.

“I promised myself two things:
1. I’d train harder than ever in the two years leading up to the Olympics.
2. I wouldn’t be afraid of failure or losing.
That was all that mattered to me. No more pressure. Just give my best!”
My hand was raised and victory was mine! I did it! And guess what? The emotional floodgates opened up and I cried!

I received my Gold Medal, our country’s national anthem providing the backdrop for my lifelong dream come true. I remember thinking that it was all worth it.

“But guess what? Even if I hadn’t won, it would’ve still been worth it.

I looked at my family and saw in their eyes overwhelming love and sense of achievement for what I had accomplished, and said to myself, “They make life worth living.” You see, winning isn’t the only thing. It really isn’t. It’s whether you’ve given it your best shot. And not just during the match but in preparation for it, too. Did you train as hard as you could?”
************************
From Coach Dory Funk Jr. – Coach of the Funking Conservatory Wrestling School – “You’ll find in life it’s very much the same. Don’t worry about winning, just do your best and remember, don’t quit! You, too, can have the time of your life!”
If you would like to become a professional wrestler and experience the “Thrill of Victory”  and the satisfaction of achieving your goals in professional wrestling, “Don’t Quit.”

To satisfy your needs and achieve your goals in professional wrestling  Train With Dory Funk Jr., Call now: 352-895-4658 for training schedules and tickets to !BANG! TV or visit http://www.dory-funk.com.
Now featured on !BANG! TV Headliners – Kurt Angle with his Wrestling Coach, Dory Funk Jr. in his corner vs Christian Cage with Jim Cornett in his corner. Go to  http://www.dory-funk.com Click on the icon, “Watch !BANG! TV Here.”

Next !BANG! TV Taping – Saturday June 19th – Advance tickets are now online at our website and available at Pardee Moving and Self Storage of Ocala, Florida

Related Items
← Previous Story They Are Wild & Taking Over The WWE!
Next Story → Live report from FCW in Melbourne