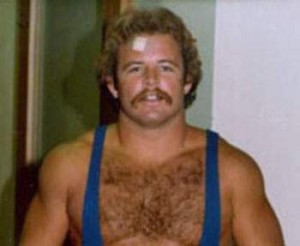 Eddie Graham was the owner and genius behind the success of the Florida Territory. The foundation of his territory was built on wrestling and credibility of the wrestlers who worked for him. If you wanted to break into the wrestling business in Florida, You had to prove yourself as a wrestler first.

Eddie Graham, Mike Graham and I were in the Wrestling office upstairs at the Sportatorium at 106 North Albany Street in Tampa, Florida. Down stairs in the arena, Larry Robinson was waiting for a tryout to become a professional wrestler.

Eddie spoke to Mike, “I don’t want this guy injured but let him know that you are the boss. He needs to know how tough wrestling can be. I want him to leave here with respect for the wrestling business.”

We walked down the steep stairs one floor to the Sportatorium Wrestling arena where Larry Robinson was waiting in the ring for his shot at becoming a professional wrestler.

Mike was all business as he did just a few exercises to warm up then entered the ring and faced off with the Larry Robinson. Mike was quick and aggressive as he dropped in for a single leg take down on Robinson and quickly came up in a riding position on top. Mike moved to the side with a half nelson that put Robinson on his back and slipped into one of his favorite wrestling holds taught to him by Gordon Nelson, the crotch and sugar hold combination. Robinson’s face turned red as he tried to fight out of the hold but there was no escaping and just before passing out Robinson Tapped and it was over.

Mike was tough and brought respect to the wrestling business. I had some of my most memorable matches with Mike Graham working throughout the Florida Territory and at the Sportatorium in Tampa with commentary by Gordon Solie and Coach John Heath.

I would like to thank Mike for the respect he brought to the wrestling business that I have benefited from so much.

My condolences to Mike’s Wife Diane and his family.

We love you Mike,

In regard to Larry Robinson – He was offered the opportunity to brush up on his wrestling skills and then could schedule a return tryout with Hiro Matsuda or Jack Brisco.