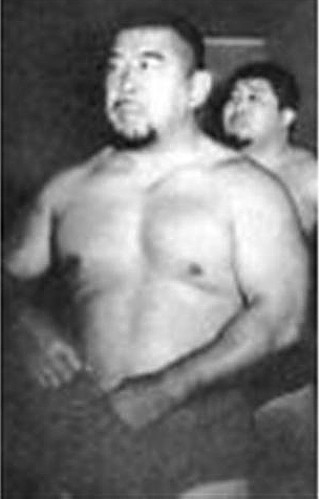 Kinji Shibuya dropped into a defensive football stance and stepped forward bringing his powerful arms up charging and lifting me at the same time.

Kinji said, “You have got to fire out of your stance make contact and lift your opponent at the same time, look for the ball and get rid of the blocker.

We were on the wrestling mat in the garage of Dory Funk Sr.’s home on the Flying Mare Ranch in Umbarger, Texas. Mom and Dad were friends of “Bob” Shibuya, professional wrestler and former football player and amateur wrestler from University of Hawaii.

Kinji was giving me advanced advice and training for a freshman on the Canyon High School Eagles Football Team and it served me well.

Few people knew of Kinji Shibuya’s football expertise as he was wrestling in the Amarillo Territory as the Japanese “Karate” Kinji Shibuya.

I had read in the Amarillo Wrestling Program that Karate in Japanese literally means Kara (Air) Te (Hand) or empty hand. Karate is a method of war for those who fight in self defense with no weapons.

A single properly executed Karate blow delivered to the throat concentrates the force of man’s body thrust over a small impact area delivering the effective force of a “slow bullet.”

Karate in wrestling was declared an illegal blow in St. Louis by Promoter Sam Muchnick and throughout the Amarillo Territory.

Karate Kinji Shibuya never used the Karate Thrust unless he was in real trouble and usually behind the referee’s back rendering his opponent helpless and generating tremendous heat.

To counter the Karate Thrust of Kinji Shibuya, my Father, Dory Funk Sr. came up with the Karate Collar, a leather collar with steel brads worn around the neck to protect one from Kinji Shibuya’s deadly karate thrust, drawing capacity crowds throughout the Amarillo Territory.

My thanks to Bob Shibuya for the help in my preparation for a career in professional sports. My condolences to his family.