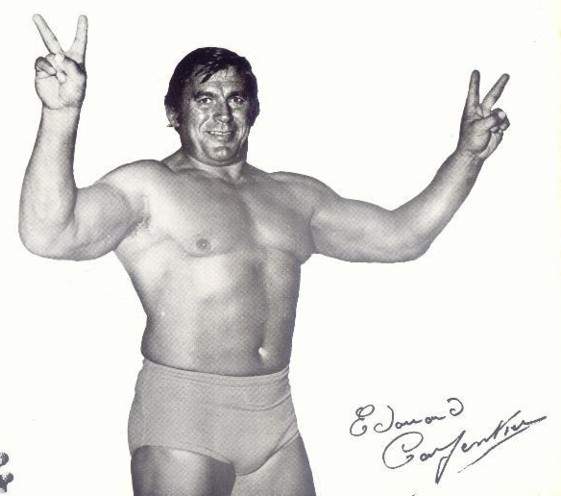 I never clarified with L’Excellance Ed as to the correct spelling of his name or his preference, because since 1959 we saw all sorts of spellings from Edouard, Edourd, Edourdo, etc. whether he was “the first” AWA or WWA world champ (helping start both promotions actually), the Omaha “AWA” champ for the Duseks, his various WWWF appearances, both major runs in my homebase territory of Los Angeles, for Baba’s AJPW in ’73 and later the AWA-related IWE; of course his AWA and Montreal main runs and more.

This was our annual big Christmas show and Carp retook the America’s title from lead heel John Tolos in the Blassie 20 foot famous cage at our L.A. Olympic Auditorium.

There was no one else like him other than a few pretenders way back when, like Ricki Starr who teamed with Ed from ’61-’63 for booking genius Jules Strongbow on several L.A. Sports Arena spectaculars before Cal Eaton coalesced everyone (including having longtime L.A. area promoter Strongbow come book for him) into one major SoCal territory. Edouard was as huge a face as there was to oppose Blassie, Monsoon and Crazy Luke Graham, our “triumpherate “of heels. Ed faced Ray Stevens on both L.A. and Shire/SF major cards too, and was seemingly bopping between SoCal, WWWF and the AWA. He was everywhere, even rekindling his longtime great feud with Walter Kowalski for the Bowser Boston promotion.

He spent 9 months back returning for us in Los Angeles in 1974 and ’75, when my homebase Lebell territory lost its two genius tagteam bookers in Jules Strongbow and Charlie “Mr.” Moto, and Leo Garabaldi sent in Louie Tillet for a few years, before Leo himself came in to get the Guerreros and Piper going for us. Tillet was smart enough to have Sheik return to L.A. to help him with booking talent there (Amazing Zulu, Mighty Igor/Dick Garza, Firpo, Wolfman Farkas, etc.) as well as the Montreal office (Dino Bravo, Blondes and Hump, etc). And the returning warrior Carp who always looked like a million bucks with the great tan and physique. Los Angeles loved its Carp.

Carp upon his return was a breath of face fresh air, as Victor Rivera was just not cutting it as lead Lebell babyface in my opinion – and that of many historians. Going from the late 60’s and early 70’s of having such major lead faces as Blassie (once he turned) and John Tolos (once he also turned) and then having them leave (Tolos would tour around the midwest and Pacific NWest anytime he felt Lebell shorted him on owed money, but would return here and there), to boring, horrid promos with a repetitive skillset like Rivera nearly killed our L.A. territory in ’73. Carp and then Pampero Firpo as our two top faces from summer of ’74 thru March ’75 helped regrow our circuit. Firpo had “returned” (he’d actually never been in L.A. before July of ’74, but they claimed he’d become the very first America’s champion in a phantom title tournament/shades of Pat P and the IC title. It was with one defense in L.A. right after we’d melded our WWA world title in ’67 with Gene Kiniski’s NWA title) to take the America’s title with his El Garfio CLAW vs Ernie Ladd in his very first Olympic Auditorium match atop the Inoki/Sakaguchi title tourny card win over Pat Patterson and Johnny Powers to take Power’s Ohio-based Pedro Martinez NWA tag title belts (first calling them the International Tag Titles, soon the NJPW straps).

Carp followed soon after to team with Firp and even Mighty Igor who Sheik sent in. Carp had great feuds in L.A. for months with John Tolos trading back/forth the America’s title until the Christmas ’74 Card blowoff match in the Blassie cage with none other than legendary Baron Michelle Leone as ref (in his last public appearance). Carp also feuded with Wolfman Farkas (fresh off his WWWF run), one odd match with George Steele who was enroute to NJPW, teaming with Dino Bravo vs Gordman and Goliath, a great KCOP TV and Wednesday Olympic Auditorium singles match with Bobby Shane (also on his way to Japan for Baba shortly before his plane crash in ’75), teaming with Andre as he did in Montreal vs the original HollyWood Blondes(Roberts and Brown) with Hump (which were great matches), and even one great match in San Bernardino against Ernie Ladd.

When Bruno Sammartino had told Vince Sr. repeatedly, and in no uncertain terms that he wanted out of the WWWF title, the Pedro experiment occured during ’71 – December of ’73. Bruno formed dream teams in Indianapolis with Bruiser and also with Carpentier in Grand Prix, defeating The Blondes for the titles on that historic first of two Jarry Park outdoor shows. I remember the deafening crowds marking out like crazy for the dramatic face team of Carp and Bruno. Perhaps the best matches I ever saw Carp have in terms of putting on the wrestling boots were against Murdoch and Harley Race. Both classics in ’75.

Some of the boys claimed Carp could be hot and cold, but to the press, he was always gracious, extremely nice and never refused a request to pose with the belt, etc. He took great pride in his appearance and his work; so perhaps some of that came off to the boys as ego-driven. I’ll dig out my taped interview with him from September of ’74 which I’m sure will bring a few tears to many.

When Carpentier held the disputed version of the NWA title, he did NOT have an actual title belt (Eddie Quinn feuding with Muchnick of course). And since the AWA wasn’t formed until August, 1960, he never held that championship in actuality. He was recognized in Omaha by the Dusek’s “AWA” promotion as world’s champ in 1958, and that is where Verne Gagne’s first recognition of him came as World champion.

Ditto for the other Thesz match leading to the formation of Jules Strongbow’s WWA on the West Coast, which had Blassie and Rikidozan and Dick Beyer tour Japan, SF, Hawaii with it, and even a few Portland defenses I believe.

No matter which territory or venue/club Ed wrestled in, everyone always perceived him as a major star, even newbie fans who had no idea of his incredible history. He just had that rare commodity of major AURA like few others. The few times I shot the outstanding Vachon’s Grand Prix promotion (one of my all time favorites), Ed just had 5 star matches with old foe Kowalski, and one great match with Don Leo Jonathon I still rave about. I will never forget covering his odd styles clash match with Jack Brisco at Kiel for the NWA belt which actually worked and was incredible.

That was Carpentier. Totally incredible. I was bummed to see the recent convention photos of him looking bloated and in a wheelchair. The Flying Frenchman in a wheelchair? Unthinkable. Unfair. It was kind of a mindblower to see someone who for decades epitomized quick and always dizzying movement chained down like that. But it happens to most everyone as they age. Just cruel though.

Here’s hoping he’s showing Brody and Bruiser his trademark cartwheel and somersault spin off the top turnbuckle with the savate kick to pin and win.