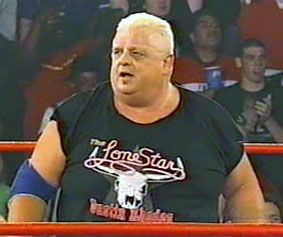 Florida wrestling legend the “American Dream” Dusty Rhodes has announced plans to return to his roots and begin a month long tour dubbed “The American Dream Tour.”  The tour consists of five feature dates throughout the state of Florida in which Rhodes will meet and greet fans during autograph sessions with Florida Championship Wrestling.  The tour will also include a special in ring return as The Dream will team with  his WWE Superstar sons Goldust and Cody Rhodes in Kissimmee, FL.

Dusty Rhodes first became a household name during the 1970’s and 1980’s competing for the original Florida Championship Wrestling.  Rhodes then moved onto the NWA/WCW where he would capture multiple World Titles before eventually joining Vince McMahon’s World Wrestling Entertainment (formerly WWF).  Rhodes was inducted into the WWE Hall of Fame in 2007. “The state of Florida is so rich in wrestling history” said Rhodes.  “Having the opportunity to do this tour and see some old friends all throughout the sunshine state is an honor I couldn’t pass up.”

The following dates are scheduled for the American Dream Tour:

“The American Dream” Dusty Rhodes will be available prior to each show to meet and sign autographs for fans in attendance.  Free Dusty Rhodes bobble heads will also be available to Gold Circle Ticket Holders.. Tickets range from $12 to $30 and are available at Buddy’s Home Furnishings locations in various tour stop cities.  Tickets are also available at www.FCWWrestling.com.

The card each night will feature 8 matches, with appearances by the stars of WWE’s NXT, the Florida Heavyweight and Florida Tag Team Champions.  There will be a Divas Bikini Contest showcasing the beautiful FCW divas.

For nearly half a century, Florida Championship Wrestling has been the Sunshine State’s primary wrestling promotion. Now officially sanctioned and recently reorganized by WWE, FCW has also become the training ground for future WWE Superstars.

Under the tutelage and leadership of Florida wrestling legend Steve Keirn, FCW’s goal for the fans is simple: To give them a glimpse at the potential Superstars of tomorrow, while providing exciting ring action that leaves the entire family with smiles on their faces.

The key objective within Florida Championship Wrestling is to train the next generation of WWE Superstars. FCW takes enormous pride in its live events all over the southeast, and in promoting tryouts at the organization’s Tampa location to showcase young men and women interested in a career as a sports-entertainer.