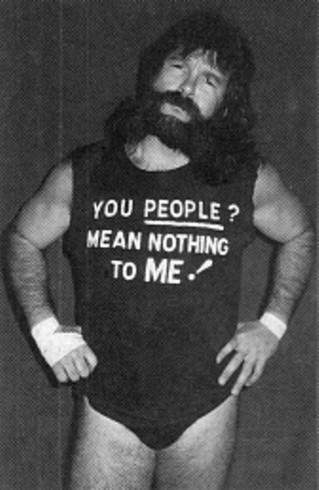 DUTCH MANTELL TALKS ABOUT  HOGAN/BISCHOFF 1997 NOSTALGIA IN TNA, THE LEGENDARY WRESTLER HE BASED AWESOME KONG‘S PUSH ON, CREATING THE KNOCKOUTS DIVISION,  AND MORE By WorldWrestlingInsanity.com

He’s a true talent from a bygone era, one of the most creative minds in the history of wrestling, and the dirtiest fighter in the brawl.  Now, the man who helped mold everyone from The Rock-n-Roll Express to Kane, “Dirty” Dutch Mantell, joins ClubWWI.com for a 46 minute shoot interview that every true fan needs to hear.

Dutch Mantell has been everywhere.  From his managing days in the WWF to his booking days in TNA to his extensive work in classic Memphis and IWA: Puerto Rico, Mantell has seen it all and added his unique spin to it.  You can hear him talk about tons of topics from those territories s in his ClubWWI.com shoot with no topic is off limits –  including classic stories from the glory days of wrestling to tales of training young stars as they came up to helping to define the industry as we know it today, Dirty Dutch explains it all.

For a full list of topics, head to: http://www.worldwrestlinginsanity.com/am2/publish/newsnotes/ClubWWI_Dutch_Mantell.shtml

Facebook members can get immediate updates on our new guests (more scheduled just this week alone!) by joining us at: http://www.facebook.com/pages/The-World-Wrestling-Insanity-Dot-Com-Page/275219172353?ref=nf

While Dutch’s legendary career has stretched through many different time periods and locations, the one freshest on the minds of most fans is TNA.  Mantell helped to shape tons of things within the company – most notably the Knockout Division.  Dutch helped the all-female division get off the ground and talks extensively in his ClubWWI.com shoot about the resistance he met to the division at first, working with the girls, why he felt it would be an important part of the promotion, Gail Kim, what the knockouts have proven, and more.  But perhaps the biggest decision he made was one that James Guttman praised him for – Awesome Kong.  Unlike any other “diva” in the business, Kong was impressive and her unique style set her apart immediately.

“Now if I hadn’t have had that concept with the gauntlet type match and the Knockout title, I don’t think I could have ever gotten that started.  Certainly, I never could have gotten Awesome Kong to TNA because she looks as far removed from a Diva or a Knockout as you can be.  Yet, when she walked down that ramp the first time in Orlando for Impact, the people stood up.  They had seen everything.  Even the regulars in the Impact Zone, they stood up and said, ‘What the hell is this?’  Because it grabbed them and I used a template with Awesome Kong that hasn’t been used in 20 or 30 years maybe.  Know what that was?”

James isn’t sure and Dutch tells us all.

“Abdullah the Butcher.  The killer.  He didn’t go off his feet.  He just beat the crap out of them.  After a while, people see Awesome Kong coming down that ramp, they knew they were gonna see someone get their little butt beat.

Dutch went on to talk about the contributions he made in TNA and the people he worked with while there, but he also talks about his departure in July of 2009.  Mantell speaks about the ratings and concepts they put together during his time, his booking style both in TNA, Puerto Rico, and other areas.  Guttman then asks directly about the people Mantell are probably asked about a lot – Hulk Hogan and Eirc Bischoff.  With The N.W.O. revival spray-painting a path through Orlando, what are Dutch’s thoughts on what they’ve done?

Dutch doesn’t end there with Hulk and Eric, though.  His opinions cut right to the point and the Dirty one doesn’t sugarcoat his thoughts on what they’ve done or will do.  He points to a recent scene from Total Nonstop Action and shoots straight with ClubWWI.com listeners about it:

“Remember January 4th when TNA went head to head (with Raw) for the first time?  Remember there’s Hogan in the ring, the band, and all?  Remember that?  And Bischoff?  That was pretty good.  It was pretty good.  But you could have looked around and said, ‘Damn.  Is this 1997 or whenever the year was?’  Nostalgia is great watching it there because fans like me or you flashback to the golden era of the Monday Night Wars, but that says two things to me – how good the product was then and how blah it’s gotten now.  One thing about nostalgia, it gets real old quick.”

He goes on to talk about the January 4th Impact, the “Band” reunion, his thoughts on reunions in general, how Andy Griffith ties into all this,  TNA’s ratings when he left, TNA’s ratings now, and much more.  It’s an exclusive ClubWWI.com shoot interview that no fan should miss!

Dutch’s story has many twists and turns, but you can follow along yourself at DutchMantell.com.  Read Dutch’s blog, pick up his new book “The World According to Dutch,” and even get your degree from his University.  The Dirty one will also join James Guttman and other former ClubWWI.com guests Jim Cornette, The Rock-n-Roll Express, Mr. Hughes, Tommy Rich, Bobby Eaton, Ivan Putski, Tito Santana, Demolition, Percy Pringle, The Kolloffs, Greg Gagne, for LegendsMania on March 12 and 13th.  Get more information on that at LegendsMania.com.