Home / Behind the Scenes / Dynamite Kid Involved in Upcoming Film 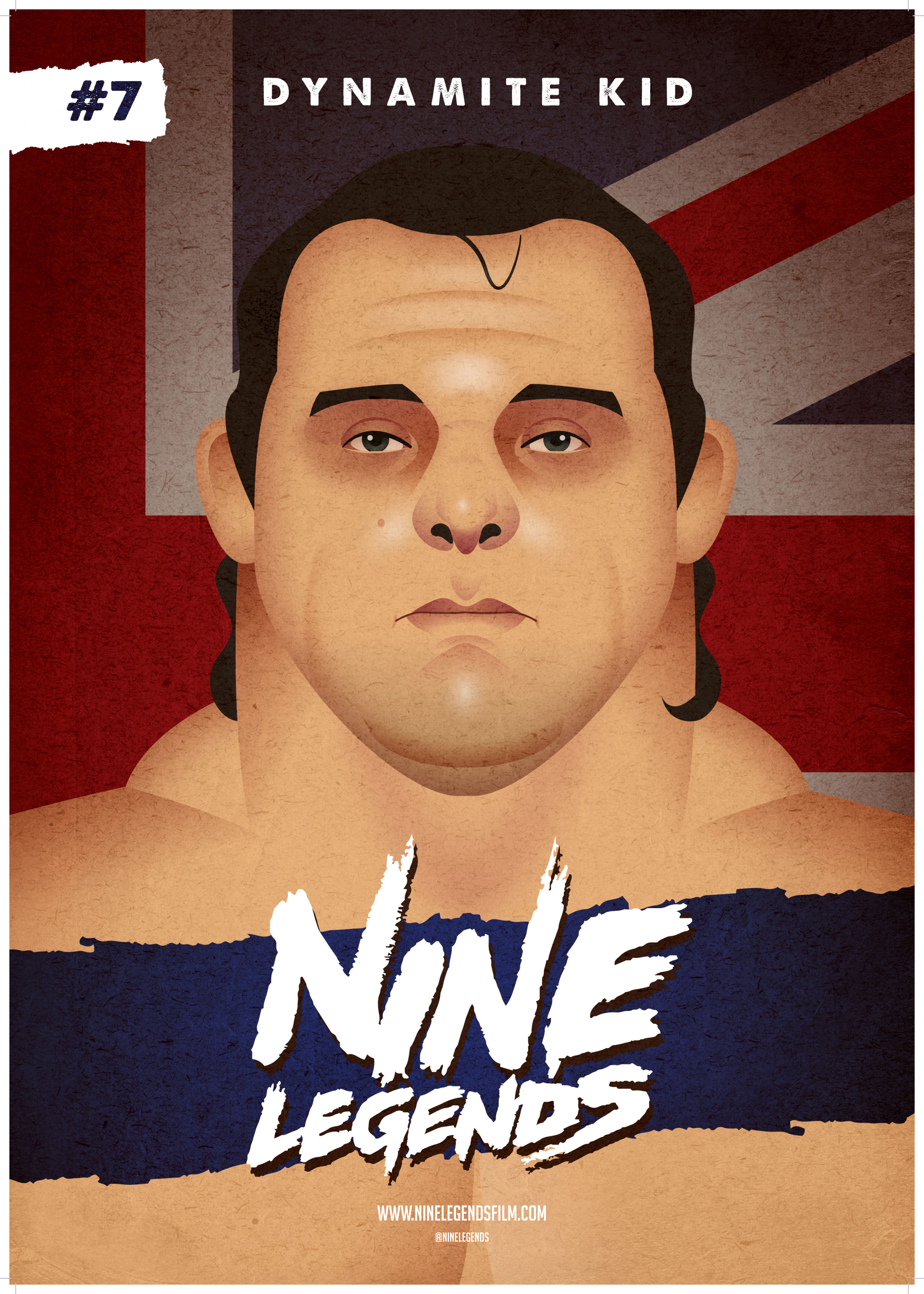 Ten years ago when I began making Bloodstained Memoirs I wanted to obtain an interview with The Dynamite Kid, Tom Billington, but as hard as I tried I wasn’t successful.

Billington had completely fallen off the grid having not spoken to anybody in the wrestling business in years. Billington was reported to have become a recluse. I remember speaking with old time British wrestlers Frank Rimmer and Wayne Bridges on the telephone at this time, both relaying to me that they lost contact with Billington years ago and even before that time he had no interest in attending the British Wrestlers Reunion events. The word bitter was used by both. I even received one Email from a WWE Hall of Famer who was well known to be a close friend of Billington in the 80’s telling me that Billington was dead.

When I decided that I was going to make a new wrestling film: Nine Legends, I again thought about trying to obtain an interview with Billington. Subsequent to my efforts CNN were able to track down Billington for an interview in the wake of the Chris Benoit double murder suicide in 2007. In that piece Tom didn’t look in good shape and was unrecognisable to his early 1980’s prime when he was a force in Japan and the WWF. He was even fairly unrecognisable to the last time his image was committed to film back in 1996 when he worked a show for Michinoku Pro Wrestling in Japan several years after his retirement when he was steroid free and scrawny; his tights barely fitting his legs.

It’s hard to imagine now, but Tom Billington once had quite the web presence back in the days of 56K modems. Fin Martin had made contact with Billington in 1998 to conduct some world class interviews, the success of which directly led to one of the first major wrestling autobiographies with 1999’s “Pure Dynamite” with Alison Coleman. It was following these successes where Billington entered the world wide web. But around the time of former tag team partner Davey Boy Smith’s death in 2002, Billington disappeared.

When CNN obtained the interview with Billington, it made renewed efforts of an interview more feasible. After all, the CNN piece proved he wasn’t adverse to appearing in front of a camera, however several years had passed since then by the time production of Nine Legends started, his position could have changed since then for all I knew.

I sent several feelers out which were effectively messages in bottles. I honestly didn’t have any idea whether the efforts would gain any traction and after a week went passed without hearing anything I assumed the feelers either didn’t reach him or simply went into his bin. However late one night I received a phone call from an unknown number; it was Billington’s wife Dot. She said Tom was very interested in giving me an interview. She spoke of her disgust for the CNN piece he contributed to, claiming that CNN arrived earlier than expected as the explanation as to why he was filmed with no shirt on, and that they were misled on a lot of the details as to when filming was taking place. She claimed the infamous shot where Tom is wheeling himself through his passage way was a result of CNN waiting outside his bathroom whilst he was using the loo without his knowledge to catch the shot of his exit. She said Tom wanted to do the project in part to repair some of the damage the CNN piece did to his image. Irrespective of any potential yellow journalism, Tom certainly did himself no favours in that piece; admitting to holding a shotgun to his then wife’s head, it was harrowing footage.

I spoke with Dot for about five minutes when she asked whether I would like to speak to Tom. He wasn’t the most talkative person on the phone but he was very polite to me and complimentary. He said the project seemed interesting and that he was keen to take part. I made arrangements to conduct the interview mere days after this phone conversation just in case he changed his mind anytime soon or his circumstances changed. After trying for years to make contact with Billington, I had to strike whilst the iron was hot.
I put more research into this interview than perhaps any other interview of the Nine Legends production. Billington didn’t have the natural charisma of the films other featured line up such as Goldberg, Chris Jericho or Mike Tyson. It was obvious that without meticulous preparation an anticipated interview would tank.

I had in my possession hours of audio recordings of Billington from 2000-2001. I studied his speaking patterns; how he responded to questions, how he engaged in conversation. I worked out what subjects he was likely to open up with and conversely what would shut him down. It was important that I was on top of this in order to get the absolute best conversation possible out of Tom.
A few days after this telephone conversation, myself and my DOP made the two hundred and fifty mile drive up to Manchester. When I finally arrived and knocked on Billington’s flat door, Dot answered. She led me into her living room where Tom was sitting with his back to me. I remember looking at his shaven head and large ears as he wheeled himself around to shake my hand with a big smile. Dot made me a cup of tea whilst me and Tom just sat down chatting for a while whilst Come Dine With Me played on the television. A framed photo of John Wayne sat on the window seal. A British Bulldogs toy set remained boxed on the coffee table.

I started the interview with filler questions which were designed only to loosen Tom up and get him comfortable with me which will likely never be released. I remember speaking to him about Matilda, the mascot of the British Bulldogs. He couldn’t remember the details but was amused by the notion of anti-drug PSA’s recorded back in the 80’s. My earlier preparation had paid off as I was able to speak with Billington in such a way that made him very comfortable with me from the outset. In return he spoke freely and in detail.

We covered a wide variety of subjects starting with his beginnings wrestling in the UK and moving into international territory. I think the conversation peaked when Billington went into detail about his series of matches with Tiger Mask in Japan which to this day remain some of the greatest wrestling matches committed to tape. There was a look of pride in his eyes reminiscing over how the matches came to be and how they were executed, and how the style of wrestling in Japan differed to that of the Western world.

All in all the interview went very well and I left Billington’s home with a sense of accomplishment. I find it hard explaining to people why an afternoon in a council estate was so interesting to me. Part of the reason is because the interview was so hard to set up: it took years. In part it was because the Dynamite Kid is one of the best wrestlers of all time and as a huge wrestling fan I naturally find it interesting talking to somebody of that status (and in this case notoriety) about their craft.

I had spoken with Billington several times since that day and he remained to exhume a good spirit. From my dealings with him it would seem any negativity or darkness which was in his life had been long extinguished. There’s a lot of stories about Billington out there. A lot of good and a lot of bad. Some disturbing. Personally to me, Tom Billington was nothing but polite and cordial.
In late 2013 I received a telephone call from Billington, however I was in a restaurant and couldn’t take it. A couple of days later it was revealed that Billington had a stroke. We haven’t spoken since.

It’s my job to self-promote, however in this type of forum without the need for hyperbole I can safely say that the Dynamite Kid interview was one of the better interviews I have produced and is certainly a highlight of the Nine Legends film. I’m happy to present a Tom Billington who took pride in his appearance and spoke with passion. The Tom Billington who broke his decade long silence with conviction. There are obviously bigger names than The Dynamite Kid in Nine Legends, but I’d put forth the argument that there are few who were better at their craft.