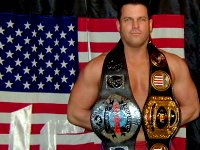 ECW ORIGINAL ANNOUNCES THAT HE HAS NO PLANS TO EVER WRESTLE AGAIN – By WorldWrestlingInsanity.com

For over 15 years, he had a problem wherever he went. From ECW to MLW, he was always ready for a fight. Now, settled into his new career position, TNA Producer Pat “Simon Diamond” Kenney has joined ClubWWI.com for a one hour shoot interview with James Guttman that tackles all subjects.

Just like when fellow TNA Producer Scott D’Amore appeared on the Club a few weeks ago to talk about how he specifically worked with the Knockout division, Pat Kenney spoke about his main area of work – TNA House Shows. Heralded by many as some of the most exciting non-TV events in years, TNA’s live events are definitely getting people talking. Simon speaks about his pride regarding these events, the thought process that goes into putting them together, what makes live events special, the similarities between them and rock concerts, and more.

But it doesn’t end there. In this one hour ClubWWI.com shoot, Kenney also tackles many hot button issues including TNA’s Internet Critics, when it crosses the line from constructive criticism, the difference between WWE and TNA, how the chants of Impact’s fans can affect the wrestlers, the Joe vs. Angle MMA style match, why he didn’t open his mouth for eight months in the ECW locker room, the “new” ECW, the evolution of Simon Diamond, Dick Hertz, the surprising wrestler who offered lines for his promos, The Extreme Horsemen, the fall of MLW, and so much more.

In the final moments of the interview, James gave Pat a chance to speak to his fans. That’s when he made it clear that his plans are focused on TNA and putting together shows, as opposed to performing on them:

“It was a great 15 years or whatever it is that I wrestled and I had a lot of fun. Hopefully I can stay in this wonderful business with TNA for 15 more years or however long they’ll have me. I don’t have a website anymore and I really don’t plan on wrestling ever again. So the best thing I can say is watch Impact on Thursday nights on Spike Television! Go to the TNA live events when they come to you area because you will see what wrestling should be and what it was.”

Simon marks the third and final member of the “Diamonds in the Rough” to join ClubWWI for a shoot interview, adding them to Demolition, The Steiners, La Resistance, Sheik and Volkoff, Head Cheese, LOD 2005, The Valiant Brothers, The Insiders, and many other tag teams.