By OWW Contributor on December 1, 2014@owwcom 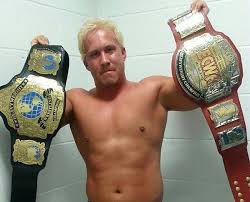 Ricky Martinez has had quite the up and down roller coaster year. Not far removed from being the most dominant and longest reigning ECWA Mid Atlantic Champion in ECWA history, Martinez has suddenly taken to whining and crying. One might ask why a top talent like Ricky Martinez has turned the corner for the worse so suddenly.

Martinez has quickly risen through the ranks in ECWA earning himself an ECWA Heavyweight Championship opportunity. But the circumstances angered Martinez. In his first attempt, Martinez took on Bobby Shields, the reigning-defending ECWA Heavyweight Champion, and TNA star Robbie E in a triple threat match. Puzzled why it wasn’t one on one like he was “promised” he wrestled under protest only to fall short, with Shields retaining.

That’s where his whining started. Claiming it was unfair how his championship went he DEMANDED another chance. ECWA management granted him another chance.

His second attempt, he took on Shields again and Dirty Money in another triple threat match for the ECWA Heavyweight title. Claiming a conspiracy between Bobby Shields and ECWA management he refused to allow the match to start at first. Even an alliance with Dirty Money fell through and again Bobby Shields retained his title.

Refusing to leave the arena, he demanded Bobby Shields give him a one on one opportunity for the ECWA Heavyweight title. Shields would take to making fun of Martinez calling him a whiner and even getting the fans to call Martinez a cry baby.

Tired of hearing the protests, ECWA booker Joe Zanolle decided to grant Ricky Martinez ONE final attempt at the ECWA Heavyweight Title… and it would be ONE ON ONE. Being a fighting champion, Bobby Shields has gladly accepted and is ready for a fight!

Or will the ‘True Talent Era’ continue on?

FIFTH AND FINAL MATCH OF THE BOSS’S CHALLENGE

*IF Saigon defeats Kekoa, he receives an ECWA Heavyweight Title Shot … IF Kekoa loses he is FIRED!!!