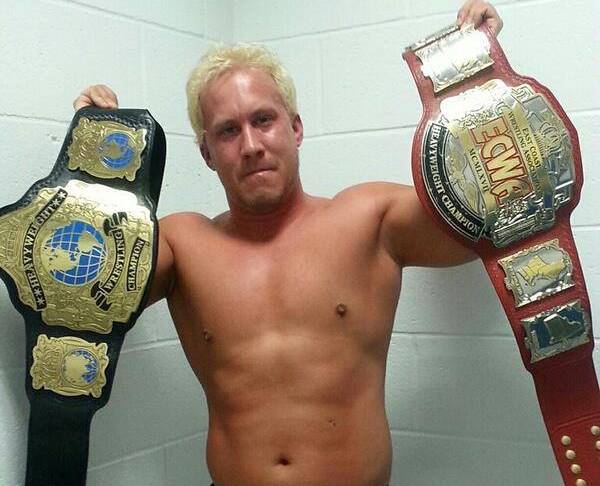 Renee Michelle defeats Jessie Kaye to become the NEW ECWA Women’s Champion after interference- In a rivalry that’s spanned months, these 2 have not pulled punches with their hatred for each other. But Michelle stooped to a new low bringing friends Team CK with her to ringside. Kaye dominated most of the match with various power moves. However, CK tried to get involved numerous times causing their own rivals D-line to come out and stop them. As the two teams brawled somehow D-line was the only one escorted to the locker room. Seizing the opportunity Team CK hit Jessie Kaye with their super kick-powerslam combo to let Michelle get the pin fall victory.

Kid USA defeats ‘The Demon’ Gus Kane via Liberty Drop- Kid USA thought he was getting a big time match but instead but greeted by one of the many faces of Gus Grand. Gus this time masqueraded as Kane from WWE. However, as usual Gus only embodied the men he imitates in look. Kid USA made quick work of Gus Kane with his cutter suplex and Liberty Drop.

*Mike Tartaglia comes out for his “popular” Boss’s Chair segment. He immediately calls out Matt Saigon. Tartaglia goes to explain how he’s sick of Saigon’s whining and complaining. How HE made Fusion DS a success and how no one heard of Saigon or friend Damian Dragon before him. Saigon goes on the offensive saying he’s tired of being loyal to a company who doesn’t use him properly. He demands a title shot. Tartaglia says ‘you got it..’ but goes on to explain Saigon has to win 5 matches in a row then he’ll get his shot. Saigon asks if the Boss wants to be his first victim… and the Boss brings out his enforcer.

Matt Saigon defeats ‘Reckless’ Donnie Hart via Ace Crusher- Tartaglia wasn’t kidding when he called out the towering powerhouse Donnie Hart. Hart immediately went to work delivering huge clubbing blows and devastating back breakers/slams. Saigon couldn’t get his feet under him as time and time again the outside interference of Tartaglia and Hart’s unmatchable power grounded him. As the fans got behind him, Saigon mounted a comeback using his speed to land blows all over Hart’s body. Just as Hart mounted his comeback going for his running powerslam finisher Saigon surprised him with an ace crusher for the 1..2..3.

‘Maple Leaf Machine’ Kao Storm defeats ‘Dragonfly’ Mark Harro via Canadian Destroyer- This rivalry has spanned years all over the state of Delaware and has finally came to a head in ECWA. Storm looked even more impressive this time after opening many eyes in the Super 8 tournament. He quickly hit Harro with dropkicks and cross bodies trying to stay away from Harro’s MMA style attacks. Harro was no slouch hitting a brutal running knee and impressive standing moonsault. Storm would rally back with two dives over the ropes. Closing in on victory, Storm would jump onto Harro’s back and hit a delayed Canadian Destroyer for the win. Afterwards, Harro would assault Storm with his chain he carries to the ring bringing out another longtime rival Chris Wylde for the save.

Phil Sly w/his legal counsel defeats Meisure Ooh La La w/Coach Jim Shorts via DQ- Ooh La La was clearly on a mission to end the 2-0 streak of Phil Sly embarrassing him with stomach chops. Running rough shot over Sly, the bumbling Frenchmen looked to easily be closing in on a victory. He posed for the fans and made chants as Sly wriggled all over the ring. As the referee was distracted by Shorts complaining, Phil Sly’s legal counsel tried to hit Ooh La La with his briefcase only to hit his own client! Ooh La La would then hit the lawyer with brass knuckles and pin Sly for the victory… or so it seemed. As he celebrated, the referee noticed the brass knuckles still on Ooh La La’s hand and then he reversed the decision to make Sly’s record 3-0!

Team CK w/Renee Michelle defeats D-line to retain the ECWA Tag Team Championships via DQ- These teams didn’t waste any time going after one another. All 4 men brawled all over the arena floor before the referee could restore order. D-line was on a roll! They would hit huge blows to Sean Carr as his partner Kage could only watch. D-line hit tag team slams and haymakers to look like they might actually regain their lost gold. But Team CK has many ways of rallying… and pulled out all the stops. Kage would hit big clotheslines and suplexes while Carr used his high flying ability to ground the much stronger members of D-line. CK hit the super kick-powerslam combo only to turn around and see Black Ice hit both of them with a chair! The referee immediately called for the bell as Black Ice seemingly went berserk. Body snatcher would eventually calm his partner down but the damage was done as Team CK retained their championships.

Bobby Shields cashes in his Golden Opportunity Contract to defeat Napalm Bomb to become the NEW ECWA HEAVYWEIGHT CHAMPION via 450 Splash- The fans were torn on who to cheer for as the popular Morant and Wylde were the favorites to win the vacant championship. This match didn’t disappoint. Wylde and Morant went right after each other in a show of mutual respect as Martinez and Napalm stalked the outside unwilling to get involved yet. Morant immediately slowed the pace hitting his trademark big haymakers and heel kicks. Wylde came back with a cannonball roll and flying forearm. As both men were already feeling the pain, Napalm and Martinez seized the chance and jumped in brutally stomping Wylde and Morant in the corner. Obviously, a partnership was created so they could eliminate the other 2 men quickly. It worked for awhile. However, Martinez got greedy and went for the victory angering Napalm. As Napalm showed his anger and attacked all men it was obvious he came to win. Wylde would fight back as all 4 men recovered showcasing an amazing array of dives over the ropes and quite possibly the most devastating move ever seen in an ECWA ring… a superplex-double power bomb combo that actually broke one of the ring’s support boards! Napalm would recover first trying to hit a Swanton Bomb on Wylde only to miss. Wylde would try the same thing and land it. 1..2.. NO! Morant with the save but he was quickly throw over the top rope by Martinez. Wylde hit a sliced bread! Napalm was ready and hit Wylde with a twisting cutter suplex to win the ECWA Heavyweight Championship.

As Napalm celebrated, a familiar upbeat song played over the speakers. It was Bobby Shields! Shields told referee John Finnegan he was cashing in the contract that granted him a title match whenever, wherever. Napalm was exhausted but had no choice than to ready himself for the match. Shields landed a devastating flying boot to the face before climbing to the top rope and landing a 450 Splash for the pin fall victory. He’s the NEW ECWA HEAVYWEIGHT CHAMPION!