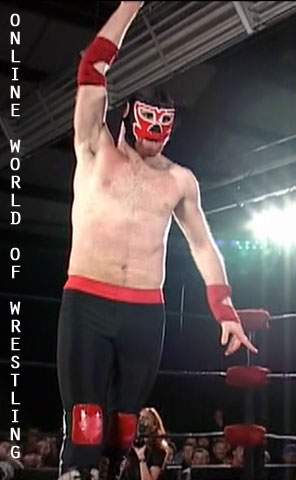 But there are no friends once the bell rings; no friends in the squared circle. Not when a title is at stake.

Kevin Steen and El Generico reminded us of that on Saturday. From the one upmanship between the two during the ring introductions with Kevin Steen reminding the world that for every accomplishment of El Generico’s career Kevin Steen did it first: going to Japan, winning the PWG title, being named Quebec’s number one wrestler, with the one exception being when El Generico won the IWS title and Kevin Steen stole it from him five minutes later.

Violent Valentine began with Max Boyer defending his IWS Canadian title against Franky the Mobster. An arrogant Max Boyer felt that his technical abilities would be more than a match for Franky, but Franky’s boisterous humour disguises a man who was trained to be an old school wrestler. A startled Max had to resort to an ambush roll-up to win the match and retain his title.

Dan Paysan and Jimmy Stone, The Untouchables, have been running their mouths for months about the inability of the Super Smash Brothers to touch them, to pin them, to beat them. Player Uno and Stupefied may have silenced the ersatz Italians by pinning Dan Paysan when Uno Goomba Stomped Dan right in his ridiculous golden spit curl and Stupefied Frog Splashed Dan for the win.

EXesS’ Open Challenge was answered by Joey Soprano… dragging his nephew Santino Italiano to the ring. Joey claimed that he had taught Santino all of EXesS’ weaknesses. Apparently, Joey’s idea of a weakness is that if you allow EXesS to hit you long enough and hard enough, his arms might get tired. Net result for Santino: two black eyes, one broken nose and a tap out to the Stretch Muffler.

Damian’s last match may have been his best. He attacked Kenny the Bastard like a man with something to prove, but Kenny has been called the IWS Rubber Ball for a reason. Every time Damian stomped Kenny down, the Bastard bounced right back, even when Damian suplexed Kenny from the top rope through a table. Kenny stole a page from Damian’s book for the win, crushing the God of War’s chest with a 360 foot stomp from the top rope.

After the match, to chants of “Please Don’t Go!” and “God of War” Damian took the mike and explained that he was leaving the IWS because he was moving to Japan in September.

Beef Wellington came to the ring to berate the crowd, remind everyone that he is a miserable bastard and to shoot on Eddie Kingston. Beef complained that there is no one left in the IWS with any heart, that everyone came to the fed just to cash a cheque, just like Eddie Kingston. This brought out Santino Italiano all heart, two black eyes and a broken nose. One SICK E. Coli pile driver later and Beef left Santino lying in the ring, yelling, “That is what your heart and your passion gets you!”

Shayne Hawke was looking for revenge against Samson, but he is still looking. Shayne used every sneaky trick in his bag of tricks and invented a few more, but he was unable to overcome Samson’s strength. The strong man also displayed some interesting technical submission techniques forcing Hawke to tap to a shoulder crab variation that made it look like he was using Hawke like an exercise machine.

After El Generico won the IWS Title, IWS Canadian Champion Max Boyer came to the ring demanding a title shot against the new champion at Know Your Enemies. Complaining that once again Max wasn’t allowing a new champion to enjoy the moment, Kevin Steen insisted that he should be allowed the title shot and not Max. Eventually, Kevin announced that at the next show, the main event would be Kevin Steen vs. El Generico vs. Max Boyer for the IWS Title.

This Sunday, our surgically detached, hideously deformed evil mutant formerly co-joined twin step-brother, Inter-Species Wrestling, will be engaging in one of the public travesties that they refer to with little regard to truth in advertising as a “Wrestling Show” by the name of Love Hurts at Foufounes Electriques.

Tickets are $12, but you can also buy a bundle of a ticket for Love Hurts and a VIP ticket for the next IWS show Know Your Enemies March 22nd for $25. That’s an IWS VIP ticket for only $13, a savings of $7!

Inter-Species Wrestling should be institutionalized for presenting Love Hurts, Sunday, February 24th, 2008 at Foufounes Electriques, 87 Ste-Catherine Est, (near the corner of Ste-Catherine and St-Laurent, near the St-Laurent metro) Montreal, Quebec, CANADA. Doors open at 7:00 pm, show starts at 8:00 pm, tickets are $12. 18+, card and times subject to change. For more information go to www.beyondthebarn.org or write to [email protected] .

Our DVDs for each show are released through www.smartmarkvideo.com. Our biggest recent release is Un F’N Sanctioned 2007 featuring then NWA World Heavyweight Champion Christian Cage – http://www.smartmarkvideo.com/main/index.php?app=ccp0&ns=prodshow&ref=iwsdvd0054&sid=3kk04hkib65w02eal6b66a85q4734bui . Our best-selling DVD from last year is Un F’N Sanctioned 2006 featuring Sabu’s last match in the indies before his re-debut on Raw (two nights later) as well as the crazy hardcore Fans Bring the Weapons match – http://www.smartmarkvideo.com/main/index.php?app=ccp0&ns=prodshow&ref=iwsdvd0043

Finally, the Film Festival that I run when I am not Manny’s slave, the YoungCuts Film Festival, is now accepting submissions:
http://www.youngcuts.com/?q=2008_YCFF

The YoungCuts Film Festival is the Premiere Showcase for Great Short Films from the Best Young Film Makers (generally 25 and under.)

To see some of the great films that have played at the Festival in the past go here:
http://www.youngcuts.com/?q=Film_Tour_Index