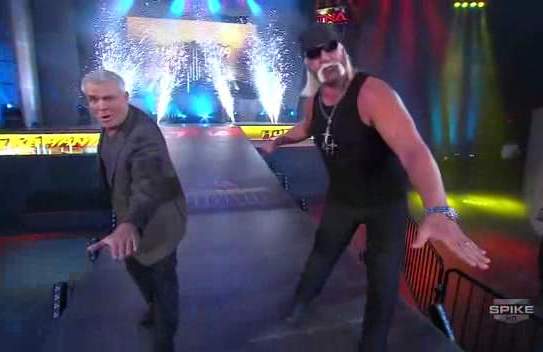 Eric Bischoff Discusses Hulk Hogan‘s Current Health Status & Why You May Not See “The Hulkster” On This Thursday Night’s “Before The Glory” Or At The Bound For Glory Pay-Per-View, His Involvement In The Bound For Glory Main Event: The TNA World Heavyweight Championship Three-Way Match (Kurt Angle vs. Mr. Anderson vs. Jeff Hardy), Whether Or Not He Feels That Wrestling Fans Have Taken More Of A Vested Interest In TNA & Bound For Glory As A Result Of ReAction (And The Show’s Effectiveness As A Whole In Building The Matches On Sunday Night’s Card), When TNA Actually Started Planning Their Ideas & Concepts For 10.10.10, What Event Or Events From His WCW/WWE Career He Can Compare The “Road To Bound For Glory” To (In Terms Of Preparation, Build-Up, & Hype), Why We Have Not Seen More Of The X-Division Leading Into Bound For Glory (And What He Believes Is In Store For The X-Division Post-BFG), What He Hopes That Fans Take Away From Thursday night’s “Before The Glory” Live Edition Of TNA iMPACT, Whether Or Not We Will See The Return Of The TNA World Heavyweight Championship Ranking System After Bound For Glory, The WWE Promoting Mick Foley’s “Countdown To Lockdown,” & The Company’s Plans For The Rest Of 2010

TNA’s Eric Bischoff was the featured guest on this week’s live edition (10/04/09) of the award-winning Monday Night Mayhem. You can feel the “MNM Fall Tour ’10” every Monday evening (at 7PM ET/6PM CT), exclusively on The Monday Night Mayhem Radio Network (www.MondayNightMayhem.com).

Eric joined The Big Mosh & “The Chairman of the Board” Todd Vincent for his return to “Your Home of Wrestling Radio” & for another installment of his exclusive monthly interactive segment on Monday Night Mayhem, “The Hot Seat With Eric Bischoff” (flavored by Sizzlin Sauces), which is now available in Windows Streaming Media or via the official MNM Podcast on iTunes:

The return of “The Hot Seat With Eric Bischoff” (flavored by Sizzlin Sauces) (MNM Podcast on iTunes): www.mondaynightmayhemarchives.com/oct10/100410.mp3

Questions were taken via Eric’s official Facebook page (located at www.Facebook.com/TheEricBischoff), along with The Mayhem Line (877.666.2110). Interview highlights courtesy of The Mayhem’s official correspondent, Paterson from New Jersey:

What event or events from his WCW/WWE career he can compare the “road to Bound For Glory” to (in terms of preparation, build-up, & hype) and when TNA actually started planning their ideas & concepts for this Sunday’s Bound For Glory Pay-Per-View: “In terms of preparation, the two that come to mind: Starrcade (’97), Hogan & Sting obviously was a big one, because it was a long-term build. It wasn’t a month-to-month kind of Pay-Per-View typical build; it was something we built for 12 months. Bash at the Beach (’96) when Hulk Hogan turned was something that also had a long term plan and build associated with it. Those are the two that come to mind. That’s what I really enjoy doing, is when you have the ability to build for a Pay-Per-View over the course of three months, four months, six months…whatever it may be. That’s not just a luxury we have anymore with twelve Pay-Per-Views. There’s so much pressure to spend three weeks promoting, four weeks promoting, boom you have a big Pay-Per-View, then you start from scratch, and you’re building again to the next Pay-Per-View. This is one where we said ‘Let’s really build it.’ We really started really planning this one and structuring it back in March of this year. I’m excited about it.”

Whether or not he feels that wrestling fans have taken more of a vested interest in the TNA product as a result of TNA ReAction & the show’s effectiveness as a whole in building the matches on the Bound For Glory PPV card: “I think it definitely has. I think ReAction has done a phenomenal job. When we created the show and started laying it out on paper, one of the things we wanted to do was to create a television show that allowed people to get inside the heads of the talent and hear from the talent in a different way than they normally do, and I think ReAction has achieved that. It’s a fresh, innovative approach that has never been done in wrestling before, and it just has a different feel to it, but the best part is if you watch it, you get to hear from the talent over an extended period of time. You’re hearing from them in their own personal point of view. It’s not a one or two-minute interview; there’s no time constraints. If we sit down with AJ Styles and shoot ReAction footage, we may shoot 20 minutes of questions & answers, and we edit it the way flows best, but it gives the talent a chance to voice their feelings, opinions, & perspectives in an entirely different way.”

An update on Hulk Hogan’s current health status & why there’s a very good chance you may not see “The Hulkster” this Thursday night on the “Before The Glory” iMPACT Spike TV special or this Sunday evening at Bound For Glory: “It’s touch & go. Let’s put it this way, we’ve spent a lot of time over the last two weeks on ‘Plan B,’ because with a back, you can’t sit, you can’t lay, you can’t stand, you can’t walk, you can’t do anything without being in pain. Hulk has been in a tremendous amount of pain really for the last year or more. It’s gotten progressively worse, but it’s too the point now where I can’t imagine it. Right now I don’t plan on him being there at either event. I know he wants to be, and I know we have plans in place for him to be. Realistically, considering he can barely get out of his house at this point, I think optimistic to put it mildly that he’s going to be able to participate, but who knows? ”

World Wrestling Entertainment promoting Mick Foley’s new book (Countdown To Lockdown) on WWE.com & on WWE television: “In terms of the promotion that it’s getting, I think it’s great for Mick obviously, because the WWE is a promotional machine, and them putting it out there & promoting it to their fanbase is a great opportunity for Mick. How it’s happening? Why it’s happening? I really don’t know. It could have been a pre-existing deal with Mick, because of the books he’s published previously with the WWE. It could be a ‘one-off’ deal. I would imagine it’s a business transaction, because the WWE doesn’t do anything, nor should they, if it doesn’t benefit them as a company.”

Why we have not seen more of the X-Division as part of the build-up to Bound For Glory & what he believes is in store for the X-Division after Sunday night’s Pay-Per-View: “What it really comes down to is we only have so much television time. We have a lot of things we have to serve. A lot of storylines, a lot of characters, and things have to be prioritized in a certain way. While the X-Division is a very vital & unique part of TNA’s profile, right now it’s not a priority for this particular Pay-Per-View (Bound For Glory). It may be the #1 priority for the next Pay-Per-View, but you can’t promote all things, all the time, all at 100%. Sometimes you have to cycle storylines, characters, and in this case, a division, because we have to put the emphasis on the key story. If we had a three-hour show every week, we might possibly keep everything at a higher profile, but unfortunately that’s not the case.”

What he hopes the fans take away from Thursday night’s “Before The Glory” live edition of iMPACT & TNA’s plans for the rest of 2010 post-Bound For Glory: “What can the fans expect from Thursday? Look at this Thursday’s show as wrestling foreplay if you will. The real event is going to happen on the 10th, but Thursday should be some great foreplay for a wrestling fan. The next three months is really to set the stage, and after Bound for Glory there is going to be seismic shift from a storyline point of view & a presentation point of view. I think people are going to see things they didn’t expect to see. We’ve worked hard to build a story that’s going to be just as exciting after Bound for Glory as it was leading up to it, and what we do for the rest of the year is really set up for what we want to do in TNA in 2011 and build towards that.”

More is contained in another installment of “The Hot Seat With Eric Bischoff” (flavored by Sizzlin Sauces), including Eric’s candid thoughts/comments on his involvement in the main event of Bound For Glory (Kurt Angle vs. Mr. Anderson vs. Jeff Hardy) to crown a new TNA World Champion (and what fans can expect from their three-way match), the intrigue to the Abyss “They” storyline leading into 10.10.10, whether to not we will see the return of TNA World Title Ranking System after Sunday’s Bound For Glory, plus more of your calls & Facebook questions! Call your local cable or satellite provider and demand No Surrender (airing this Sunday night on Pay-Per-View). “The Hot Seat With Eric Bischoff” (flavored by Sizzlin Sauces) returns Monday night, November 1st leading into TNA’s Turning Point PPV…exclusively on “Your Home of Wrestling Radio.” Check out Eric’s official website (located at www.EricBischoff.com), along with the newly-launched BHE TV website (located at www.BHE.tv). Get the latest on the exciting new projects coming your way from Bischoff-Hervey Entertainment! Don’t forget to follow Eric on his official Twitter page (located at www.Twitter.com/EBischoff), and join the more than 19,000+ fans on EB’s official Facebook page (located at www.Facebook.com/TheEricBischoff).