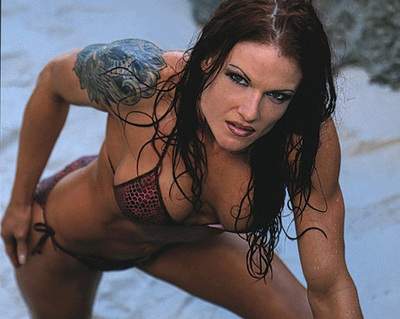 By: Bob Colling from http://wrestlingrecaps.wordpress.com/

Jack mentions that Lita is shooting a pilot later this month. Lita mentions that her show “Silver Scream Spook Show” has aired one hundred episodes and has been planning to shoot a pilot episode. Lita describes the show as being Pee Wee Adventure meeting the Munsters.

Lita is told about the WWE retiring the WWE Women’s Championship. Lita says that the person holding the championship can only make people care about it. She doesn’t believe that Harvey Wippleman added anything to the belt.

Spec Sun asks who came up with Lita’s gimmick in ECW. Lita credits Paul Heyman with the idea of Miss Congeality. She never quite understood the character. Lita jokes about the proposal with a “classy condom” angle.

El Santo calls in and wants to know when is Lita coming out with new music. Lita would love to, but her drummer is on tour. She is hoping that by the new year they can get back to work on the music.

Jack asks about Lita’s last promo in WWE. Lita says the promo was written by her and that there may have been shades of truth in the promo.

Jack asks if Lita would ever go back to wrestling. Recently, Lita says she has thought about returning to wrestling for fun. Lita wouldn’t be opposed to making a few shows.

Lita hasn’t been asked to comeback to WWE since her departure but she maintains a good relantionship with everyone in WWE.

Lita really thought she worked with Edge very well. Lita really enjoyed working with Edge and John Cena because they were all friends.

Jack mentions that recent Matt Hardy videos. “Oh my god, what happened to that guy?” says Lita. Lita talks about maturity and the association with the videos recently.

Lita notes that Matt Hardy was professional to work with throughout the feud. She does believe that Hardy may have complained to his friends about having to feud with a woman.

Barbie asks if the lesbian angle with Trish Stratus was offered to Lita first. Lita can not recall if she was offered first but she very well could have been. Lita jokes about being involved with the demon spell angle which “was a good one, right?”

Lita says it is easy to turn down a angle.. But then you are taken off television!

Andrew calls in and asks about the TLC match from Wrestle Mania 17. Lita can not remember how much the wrestlers knew beforehand since it was a long time ago. Lita says that she doesn’t get sick of watching those crazy matches.

Lita didn’t have a problem doing high risk moves after her neck injury because it wasn’t her fault but rather a fluke. The first few moves were scary though.

Barbie mentions Lita’s run as a commentator on WWE HEAT. Lita enjoyed commentating as she was learning new stuff.

A caller asks about Lita’s character being booked as a trashy female in ECW. Lita didn’t care about the chants from the fans in the original ECW. The only problem she had with the angle in WWE involving herself, Edge and Matt Hardy was with the blurring of the lines between reality and angle. Lita mentions that she turned down offers to pose for Playboy because of young teens looking up to her.

John calls in and asks about a rumor that Lita didn’t want to shake hands with people in the locker room and that she wanted to quickly leave the arena. Lita says she had a fun time and that if she didn’t want to go, she wouldn’t have gone.

Lita thinks that internet for wrestling is good for fans to keep them interested in the business. Lita thinks it is pretty cool how dedicated wrestling fans are to wrestling.

Lita says she will be doing a few appearances here and there.