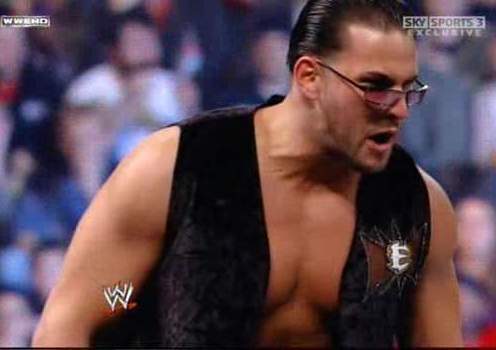 Eric’s first radio interview since his WWE release is now available for free in Windows Streaming Media, or via Monday Night Mayhem’s official Podcast on ITunes:

Here are some of the highlights from Eric’s exclusive interview, provided by The Mayhem’s official correspondent, Paterson From New Jersey:

Former WWE superstar, Eric Escobar, joined the award-winning Monday Night Mayhem Radio Network for his first radio interview since parting ways with World Wrestling Entertainment at the mid-point of last month. During his entry into WWE television, he was aligned with SmackDown’s official consultant, Vickie Guerrero, and with the success she had with her then on-air fiancee, Edge, on both SmackDown & RAW, many fans thought that this would be good for Escobar’s WWE career, just as it was getting started. The storyline quickly flamed out however. Eric went on the record with The Big Mosh, Blade, & “The Chairman Of The Board” Todd Vincent to discuss his baptismal by fire on WWE television, along with why things ended up the way they did. “To be quite honest, I’m still trying to figure that one out. It was a great opportunity working with Vickie; she’s a classy lady, and I have nothing but respect for her. One of the things Vickie & I always asked each other was why were they rushing everything? It seemed like they were trying to rush everything on one week to the next; we had no story. The only story is that she went to Puerto Rico, she met you, and that was it. We wanted to build up some kind of a story — like how did it happen/was I working in Puerto Rico/was she scouting talent? They never gave us an explanation on the whole thing. Then we started doing the vignettes, and Vince (McMahon) wanted me to be this ruthless, very intense, very intense Latino, and I said ‘Cool, I have no problem with that.’ But the people that were in charge of putting my matches together were telling me some other things, and I was like ‘Who do I pay attention to?’ Obviously I was going to pay attention to Vince, but at the same time, I have this guy in my ear telling me ‘you have to do this,’ so it was kinda’ confusing at times. I think I did the best I could with what they were giving me to work with.”

With such amazing stories like “The Straightedge Superstar” CM Punk & the current WWE Intercontinental Champion Drew McIntyre, there are unfortunately many young WWE talents over the years that have brought up too fast and not given the right opportunities to succeed. Escobar was in the WWE developmental system for four years (in Deep South Wrestling & Florida Championship Wrestling), so Eric was asked by The Mayhem Crew if he feels jaded in any way with the amount of time he spent working to get the call-up, only to be pushed aside so quickly, while others without the time spent working are getting their opportunities to shine. “I think it’s kinda’ funny people are interested in me to be honest. I didn’t think there were a while a lot of people who even knew I exist. I did put in my time, and I did get the training, but when I started in Puerto Rico, I was never a great wrestler. I was a great entertainer, but most importantly, I was obedient. If someone told me to do something, and you had 20, 30 years experience, I would listen. Some guys like Bill DeMott told me to do something; I didn’t question him…I did it. I was in FCW, and all I kept hearing from agents, producers, & people in the WWE offices was that ‘the time was not right.’ I’m like ‘four years, and the time has not been right.”

At the WWE Bragging Rights Pay-Per-View this past October, Eric was supposed to be one of the talents featured in the main event match between RAW & SmackDown superstar, but the lineup for the SmackDown team was scrapped at the last minute, and Escobar, along with several other superstars were taken from the match. To this day, many have wondered the real reason why “the switch” was made, and Escobar gave his thoughts on his reaction to being pulled from the bout & what happened leading into the days of that event. “To be completely honest, I missed out on that payday, and that really sucked & really pissed me off. To be honest, I don’t know what happened. We get there at the show, and I’m talking to Dolph Ziggler & Drew McIntyre when Michael Hayes got all the guys together, and he said they we were losing our spots on the Pay-Per-View. And we looked at each other and I was like ‘What the f*ck?’ I’m looking at all the guys, and saying ‘Who messed up here?,’ and ‘What happened?’ He said it wasn’t us, but that they looked at the team itself, and it looked weak. It was Jericho & Kane, and the rest of us guys, which made sense at the time, but at the same time, I thought it was the younger generation wave of younger talent. What better way to put us in the ring with Triple H, Shawn Michaels, Jericho, Big Show — with all these superstars and make all of us at the same time. But they didn’t see it that way, and apparently it was just that. That’s what they told us, and I’m pretty sure the WWE has never lied to anyone before, so I’m gonna’ leave you with that.”

Two superstars Escobar had the chance to work extensively was former WWE Champion Sheamus & the aforementioned WWE IC Champion Drew McIntyre. Mosh asked Eric for his opinions on just how good they both really are, in lieu of some of the criticisms both have faced from critics. “When it comes to Drew & Sheamus, apparently Drew was the “chosen one,” since Vince saw him before he even debuted. When he first laid eyes on him, he saw it. He saw it and said ‘He’s gonna’ be my future champion.’ So Drew is the chosen one and he is very, very good. He’s a good worker. Sheamus is very aggressive in the ring, very intense…sometimes a little too intense. This is supposed to be entertainment, and we are supposed to make it look real, but not make it real. As far as him being a great worker, let’s just say they are putting him in the ring with the right people right now. I’m not saying he’s a bad worker, but I’m saying he’s not that good right now. He could be great in the future, but not right now. And they already gave him a good run, and that’s great…he’s made. All he has to do is follow the program, and he’ll be great.”

Whenever a superstar leaves World Wrestling Entertainment, it is almost virtually guaranteed that the rumors to TNA will begin. Has there been any conversations with TNA for Eric? “The TNA product is very different; it’s very cool. I watch it from time to time, and the guys have no problem tying to outdo each other in a match. I don’t see anyone, apparently having problems with the politics because so & so is in the main event. If there’s something to TNA, it’s the fact I can communicate with both markets American & Latino markets. So I guess if Dixie Carter is looking for a gofer or something, but I did date Vickie Guerrero for a little bit…I’ll date Dixie Carter.”

More is contained in this exclusive interview with Eric Escobar, including his candid thoughts on if he would consider going back to World Wrestling Entertainment if the opportunity presented itself, the storyline idea he had for himself, Vickie Guerrero, & Edge (and why it never came to fruition), which superstars he spoke to for advice during his time in the WWE, his future plans for his return to Puerto Rico (and the World Wrestling Council), the differences between working in the United States & Puerto Rico, plus so much more!