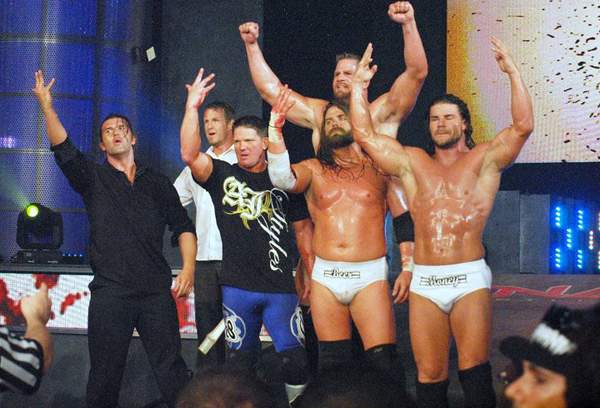 In TNA Wrestling, Ric Flair‘s Fortune continues to be major players. This week, I want to take a look at each of them individually. Chances are, within a year, the group will have been changed to some degree. As of now Matt Morgan and Doug Williams are both out of the group.

Like most stables in pro wrestling, members will come and go. But, which ones are here to stay. Let’s start with the easiest one first.

Ric Flair: He is the manager of the group and the main mouthpiece for the group. He will be in the group until TNA’s booking committee decide that they don’t want Fortune around as a group anymore. Let’s face it. This is the role that everyone wanted for years. Ric Flair has a manager for a new group of stars. Ric Flair is in this one for the long haul and I think he fits his role very well.

AJ Styles: Many people would like to see AJ Styles go back to what he was. I think he is fine where he is now. Some say he is a Ric Flair copy, but the way I see it is that they are adding some character to him. The lack of character was what most people were complaining about AJ Styles. Not just AJ Styles though, the entire X-Division. Styles is still the same in the ring and still as great as ever. While, I don’t think he has a chance of leaving the group, he has less of a chance than Flair. However, I would say his chances of leaving the group (unless for injury) is very slim.

Kazarian: He had the same problem as AJ Styles. No character or personality. Then he became Suicide. He got a character and people didn’t like that. This is another example of pro wrestling fans wanting something and then getting it and still not being happy. Some still don’t think he fits in with Fortune. I think that he has a decent chance of not being in the group. Right now, he is pretty expendable. If they want to kick someone out of the group without breaking up a tag team, then Kazarian will have to look for other friends on Impact.

Beer Money is an interesting situation. I definitely feel one of them will be out of the group within the next year. They have won the tag team titles numerous times and they are a great tag team. However, they do not really have anywhere to go now. I can see TNA kicking either one out of the group but let’s take a look at them individually.

Robert Roode: Those who have seen his singles run awhile back knows just how good Robert Roode is at being a heel. I have a hard time picturing his a good guy and because of this, I think Robert Roode would be the one to stay in the Fortune group. Even before Fortune was a group, I would say Roode looked like the current gimmick.

James Storm: Within a year, I expect James Storm to be out of Fortune. Unlike Roode, I do not see him as a strong singles competitor. Storm was/is a great tag team wrestler so I could see him getting another partner to feud with Fortune, which would be very entertaining. At the end of the day, if I had to pick one person that would no longer be part of Fortune within the next year, I would have to go with James Storm. But it would not be the end of the James Storm. It would be like a new beginning for this great tag team wrestler.

Listen to the latest Sunset Flip Wrestling Show at sunsetflipwrestling.podomatic.com

Related Items
← Previous Story AS I SEE IT: Remembering Eddie Guerrero
Next Story → The Undertaker’s Career