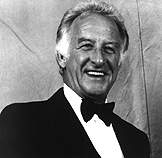 Over the past couple of weeks, I have been very positive in regards to pro wrestling. How can someone not be? We have the new Monday Night Wars between TNA and WWE, we have Wrestlelicious, we will have dueling midget wrestling promotions this summer, and Wrestlemania is coming up.

However, in the middle of my happiness, I read an article that angered me.
http://www.jsonline.com/sports/brewers/87535952.html

I am not sure what angered me more. The fact that WWE looks like they will induct Uecker into the Hall of Fame this year or the fact that they have made attempts before to get him in.
Anyone that has ever listened to the Sunset Flip Wrestling Show knows that I don’t think much of the WWE Hall of Fame as it is.
Anyone that thinks the induction of Bob Uecker into the WWE hall of Fame is great, please stand up. Stand up and yell out loud “My favorite moment in pro wrestling history is when David Arquette won the WCW World championship!”. I am sure there are going to be some morons that read this and say “well it’s the celebrity wing”. What other sporting Hall of Fame has a celebrity wing? I don’t think any of them do.
If you are reading this and you are currently a pro wrestler, whether it be with a major company or an independent level, you should be furious.

What annoys me the most about all of this is that I have the greatest respect for pro wrestlers. They put their bodies on the line every day for the fans’ entertainment. Especially in the indy circuit, they probably are not getting paid much. They just love doing it and they love performing in front of the fans, whether it’s 5000 fans or even 5 fans. Most are on the road all the time like a traveling circus and barely get to spend time with friends and family. These are the sacrifices that pro wrestlers make, for the fans and the business. To have Bob Uecker in the WWE Hall of Fame, that should be a slap to the face to every single pro wrestler that is not in the WWE Hall of Fame yet. If it is not, then either you stopped caring about the WWE Hall of Fame long ago or you should just get out of wrestling right now.
There are a couple of reasons why the WWE Hall of Fame is a joke and should not be considered by wrestling fans as a real Hall of Fame.
The first being is that there are no real credentials to be in it, except for the fact that Vince McMahon likes you today. I hate message board threads that have topics such as “Will “X” wrestler get into the WWE Hall of Fame?”. Here is the easy answer for everybody. EVERYONE on the current WWE roster will be in the WWE Hall of Fame one day so please let’s not waste message board threads on it.
To me, if there was any credential to being in the WWE Hall of Fame, it should be that you are no longer doing anything on a full time basis. JR and Jerry Lawler both go against this rule, although JR has not been on due to his sickness. By the way, get well JR, all the other announcers have been unbearable.
There is also no voting by a committee or anything like that to be put into the WWE Hall of Fame. And finally, as mentioned, there is a celebrity wing. A celebrity wing is just absurd in itself.
It should be noted that my issue is not with Mr. Uecker. It’s an extra payday and if I was offered the shot to go, I would go just for the money. To me, this all lies on WWE management. I also don’t want to come across that I don’t respect anyone that is currently in the WWE Hall of Fame. They are some of the best in the business and they deserve to be in a real Hall of Fame.
I will not make the effort to watch the WWE Hall of Fame this year and anyone that is a true pro wrestling fan shouldn’t as well. To be honest, as said on the show, this year is probably the worst class of all time. Dibiase? Never held a major WWE singles title other than one he made. Inoki? Respect the hell out of him but most US fans probably don’t know who he is. Richter? Joke. Of course, we all know how I feel about Uecker. Mad Dog Vachon? Should be good but why isn’t Luna inducting him?
Vince McMahon always used to say “anything can happen in the World Wrestling Federation”. Well, in the now WWE, anything can happen too. BASEBALL players can be in a PRO WRESTLING Hall of Fame.
In closing, fuck the WWE Hall of Fame. Unless someone like Savage or Warrior or Sammartino get in, I will probably not make the effort to watch it.

Check out this week’s episode of Sunset Flip wrestling at sunsetflipwrestling.podomatic.com where I am happy with the world of wrestling. We talk Monday night Wars, Wrestlelicious, PG Steve Austin and much more.