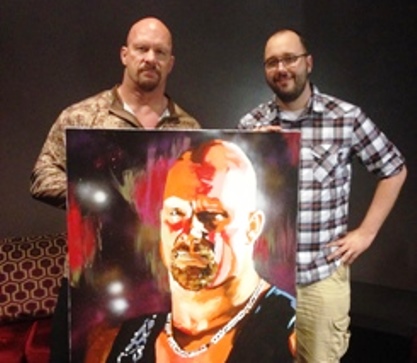 Famed wrestling artist Rob Schamberger has teamed up with the WWE and “Stone Cold” Steve Austin to put an end to pediatric brain and spinal cancer! Schamberger has donated his painting of Stone Cold, which he painted live in August at SummerSlam, to be auctioned by WWE with 100% of the net proceeds going to The Children’s Hospital of Pittsburgh Foundation, for the benefit of Connor’s Cure. Named after Connor ‘The Crusher’ Michalek, an 8 year-old boy who passed away from Medulloblastoma, a rare tumor that affects the brain and spinal cord. Donations to Connor’s Cure will provide funds for pediatric brain and spinal cancer research, and medical care for children and their families.

On his painting being included in the auction, Schamberger says, “I couldn’t be more proud and humbled to be a part of such an amazing cause. Connor 3:16 says we’re going to whoop cancer’s ass!” Bidding closes on Tuesday, September 30th so go now to auction.wwe.com (link to just charity items: http://auction.wwe.com/iSynApp/auctionDisplay.action?auctionId=350445 ) to bid on this and the many other historic pieces of memorabilia available for this worthy cause!