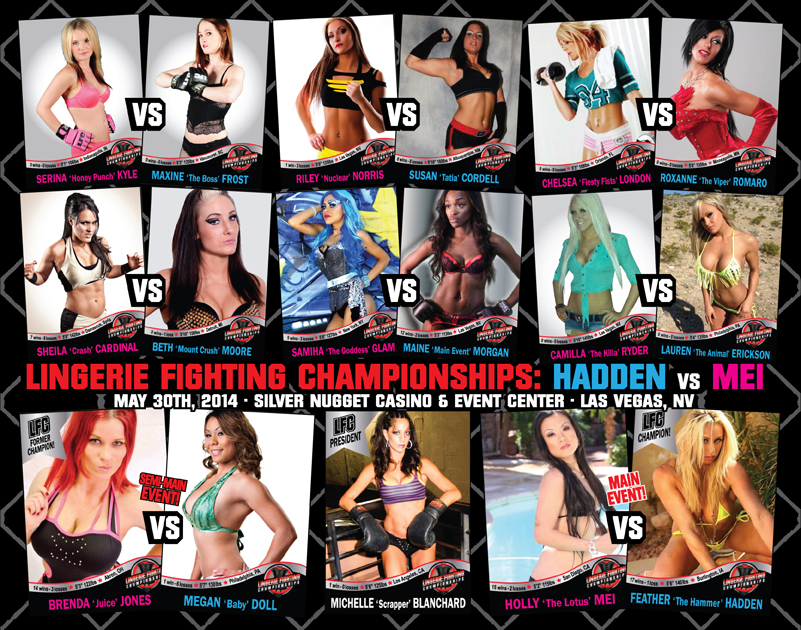 New Lingerie Fighting Championships’ President Michelle Blanchard unveiled the match-ups today for the upcoming LFC19 which will take place Friday, May 30 at 8pm in Las Vegas at the Silver Nugget Casino & Event Center.

The card features a mix of brand new fighters and returning veterans such as former LFC champ Brenda ‘Juice’ Jones who will take on Megan ‘Baby’ Doll in the evening’s semi-main event.

Fighters are coming from all over the world to take part in LFC19 which promises to be as entertaining as it is controversial.

Brand new LFC fighter Serina ‘Honey Punch’ Kyle is unapologetic about her decision to join the league. “I’ve always been very athletic and I love a good fight,” the 5’1″ blonde says. “I like that I can fight and still look pretty.”

Once again rising star MaiNe ‘Main Event’ Morgan has been denied the title shot she covets against LFC champ Feather ‘The Hammer’ Hadden, drawing Samiha ‘The Goddess’ Glam as her opponent instead. Morgan’s 14-3 record would suggest a mis-match considering Glam is only 5-3.

Hadden will take on Holly ‘The Lotus’ Mei in the evening’s main event. On paper the two seem evenly matched as Hadden owns an impressive 17-1 record while Mei is 15-2 but the champ has been training harder than ever after her embarrassing loss to former ring-girl Jody Connacher at LFC18.

Promoters are predicting a sell-out in Las Vegas. LFC plans to hold LFC20 in Los Angeles and LFC21 in New York.

Lingerie Fighting Championship is being distributed by MultiVision Media, Inc. and will be available in the United States and Canada in over 90 million households via cable and satellite, and around the world via steaming. Please check lingeriefc.com for a link to streaming PPV.