Floyd Mayweather to appear at WrestleMania 29? 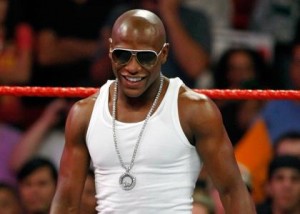 New York City-based radio DJ Peter Rosenberg (Hot 97) has conducted exclusive interviews with all of WWE’s top superstars and spoke with boxing champion and WrestleMania 24 celebrity Floyd Mayweather.  Mayweather spoke about his close relationship with Triple H, a potential dream fight with Manny Pacquiao and dropped the bombshell news that he will be appearing at WrestleMania 29 from the Met Life Stadium in NY/NJ next April.

Mayweather talked about his past experience working with (ie. breaking the nose of) Big Show and told Rosenberg, “I’m about to go back to the WWE.” When pressed for a follow-up, he clarified: “WrestleMania.”

He repeated, “WrestleMania. I’ll be back.”