By OWW Contributor on September 23, 2015@owwcom 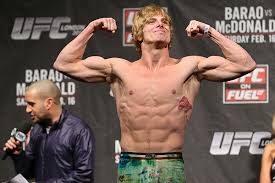 EVOLVE Wrestling, a brand of the World Wrestling Network (WWN), is pleased to announce that Matthew Riddle has signed to wrestle at EVOLVE 49 on October 17th in Queens, NY and EVOLVE 50 on October 18th in Deer Park, NY. These events will be broadcast at www.WWNLive.com on live iPPV.
Riddle comes to EVOLVE after training at the world renowned The Monster Factory since last November. Riddle, known as “Deep Waters” in UFC, is a lightning rod of controversy. He made a lasting impression as part of The Ultimate Fighter: Team Rampage vs. Team Forrest. He is remembered for having the “biggest knockout in The Ultimate Fighter history” according to Dana White. Riddle finished his MMA career with an 8-3 record before turning his attention to pro wrestling.
“We are very intrigued to have Matthew Riddle in EVOLVE,” WWN VP Of Talent Relations, Creative & Marketing Gabe Sapolsky said. “He is a total natural in the ring and fits perfectly into the EVOLVE style we’ve established in the last year. He is a blue chip prospect.”
EVOLVE will be Riddle’s highest profile pro wrestling events in his young career. Riddle’s training has progressed rapidly under the guidance of the esteemed Danny Cage at The Monster Factory. Riddle has not wrestled outside of The Monster Factory’s monthly student shows yet.
EVOLVE is known for a realistic, submission, striking and kicking based style of pro wrestling. WWN has been a company where many of WWE’s new generation of Superstars honed their craft and reached the next level of their career including current WWE Champion Seth Rollins, Daniel Bryan, Dean Ambrose, Luke Harper, Neville, Cesaro, Kalisto, Kevin Owens and others.
“I’m super stoked to be given an opportunity to work with EVOLVE and I think we’ll work really well together,” Riddle said. “Pro wrestling has been my passion for a long time. Now that I’m pursuing it, EVOLVE will be a great place to get the ball rolling on my future.”
Riddle’s opponents at EVOLVE will be announced at a later date. Go to www.DGUSA.tv for ticket information to these events. The basic info is:
EVOLVE 49
Saturday, October 17th, 2015
Belltime: 7pm
La Boom
56-15 Northern Blvd.
Woodside, Queens, NY
Sunday, October 18th, 2015
Belltime – 8PM EST
The Sportatorium
435-13 Brook Avenue
Deer Park, NY 11729
Related Itemsmatt rivieraufc
← Previous Story OSWA Wrestling is ready for “Halloween Horror”!
Next Story → Upcoming Indy Wrestling Events September 24 – October 4, 2015