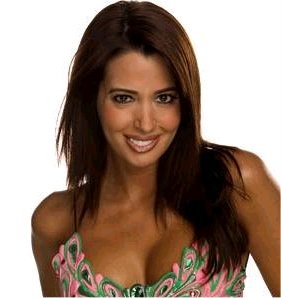 Former WWE Diva Amy Weber recently took some time to sit down for an interview with PWMania.com. Weber spoke on several subjects from her music and acting career to her time in WWE. She elaborated on WWE’s backstage atmosphere calling it a “boys club” and brought up rumors of someone taking a dump in her suitcase. Weber also said that she’d love to make a WWE comeback.

Collaborating with Sean Kingston: It was a great experience. It was very eye opening getting to interact with someone who has certainly experienced the top when it comes to the music industry. He was so talented and very business minded. I just collaborated with Romeo Miller and there are a few others on my list  like Tao Cruz, Tiesto, Usher, Enrique Iglesias.

Returning to WWE: I would love to make a comeback and perform for their fans as a singer.

WWE’s backstage atmosphere and rumors: It was definitely more of a “boys club” when I was there. I just wasn’t used to that. I was used to the way Hollywood works and there is certainly a different system in place at that company. It really taught me to not be as sensitive to things- especially when people seem to be mean spirited but are actually just messing around with you on a joking level. One of the main guys on the Roster said something to me after I left which was.. they wouldn’t have been razzing you so much if they didn’t like you. There were other more severe things that happened that were disrespectful on a whole new level, and NO.. IT didn’t include anyone taking a dump in my suitcase.. That is so ridiculous and that rumor needs to be buried here and now.. That happened I think to Sable or someone way before I even stepped foot in that show.