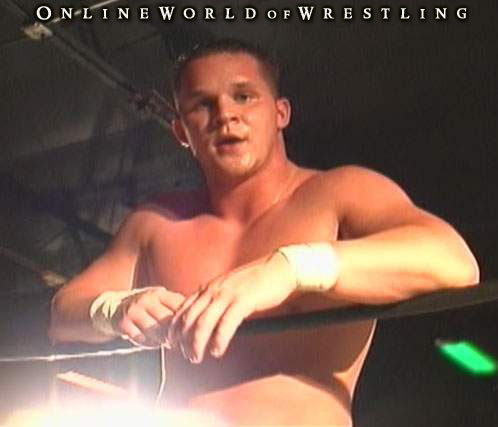 The latest episode of FIP Radio, which features Steve Madison as the special guest, is available for download at:

MSL: And we are back, Mister Saint Laurent here, with Steve Madison. And Steve, this is your first time on FIP Radio, I know youâ€™ve got to be excited!

SM: Iâ€™m absolutely ecstatic to be on FIP Radio, my favorite wrestling radio show to listen to.

MSL: Steve Madison, clearly being facetious, but thatâ€™s okay, Iâ€™ll take the compliments anywhere I can get them. Legitimate or not!

MSL: Now Steve, weâ€™ve seen a lot go down in the last couple of month here in FIP. You were a member of the YRRâ€¦

SM: A founding member of the YRR!

MSL: And now you are not a member of the YRR!

SM: Now I am not a member of the YRR.

MSL: For the people that have not been paying close attention, but they love the internet so much, that they listen to the show anyways, what happened?

SM: Well, Chasyn Rance and Iâ€¦Okay, if we even go back to the beginning here with Erick Stevens and I doing the Miracle Violence Connection, and having a successful run with that. And then that ran itâ€™s course, and eventually we decided that, things just werenâ€™t going that way, or, we didnâ€™t even decided it, I kindaâ€™ just decided on my own, to try something different. I started talking with Chasyn one day, and we decided to start this YRR thing. A lot of things in common, young, rich, and ready for action. And at that time it seemed like a good idea. That ran itâ€™s course for a while. Sal Rinauro came in, Kenny King came in, at various different timesâ€¦

SM: Well, that was the beginning of the end right there. Because, in January I had a match with Erick Stevens, who I was feuding with, obviously from the tag team breakup.

MSL: So the fallout of the Connection became the disconnection!

SM: Right, absolutely. Became a malfunction. Erick and I worked, our last hurrah was that dog collar match. And that day, Claudio showed up, and I wasnâ€™t even asked about it. They just kindaâ€™ threw him into the YRR. And I kindaâ€™ saw the writing on the wall right there. And then after the match, all beat up, bloodied up, no Chasyn, no Kenny, no Sal, I donâ€™t even know Claudio, no Claudioâ€¦.

MSL: You werenâ€™t part of the decision making process that brought him in.

SM: Yeah! I was the founding member, come on! Chasyn and I.

MSL: Nothing against Claudio, butâ€¦

SM: Yeah, nothing against Claudio, but that was the writing on the wall right there. You come into the locker room, and all of the sudden the guys tell you â€˜Hey this is Claudio, heâ€™s a member of the YRR.â€™, and I was like â€˜Who is this guy? I donâ€™t know who he is!â€™. And after the dog collar match, get all beat up, no Chasyn, no Kenny, not to be redundant, no Sal, no Claudio, again, because I donâ€™t know him, no phone calls, no nothing. Taking some recovery time. Next thing you know, when I come back, they said they were my buddies, didnâ€™t hear from them for a long time. And you know, come back, wrestle a match, now all the sudden they want to be buddy-buddy. Didnâ€™t even have time to talk to me during the day, floating me off in the hallway. And I kindaâ€™ decided right then and there that it wasnâ€™t what I wanted to do anymore. So Iâ€™m done with the YRR and kindaâ€™ doing my own thing right now.

MSL: And now, weâ€™ve since you since leaving the YRR. Kindaâ€™ just because you guys have a common enemy now. Weâ€™ve seen you with the Heartbreak Express, we saw a very violent war, recently in Melbourne, where you and Heartbreak Express took on the YRR. Now the YRR brought in some hired assassins, so I want to ask you about this.

SM: Yeah they had Ricky Vega and Mad Man Pondo.

MSL: What was it like, having to get in there with Mad Man Pondo?

SM: Yeah, it goes without saying. But anything to get to the YRR, anything to get to Kenny King, and get to Chasyn. And they got Ricky, and they had Pondo, so we had to go in there and take care of business, and Heartbreak Express came out on top. And Black Market came in for the big save at the end. We were having a bit of trouble there, and you know, having Black Market and Heartbreak Express in the ring togetherâ€¦

MSL: Now let me ask you about this Steve. When you team with the Heartbreak Express, picking up victories, potentially embracing after the match, in a sign of close friendship, how does it feel? Does it make you feel a little effeminate? Or does it not bother you.

SM: A little effeminate? No, Iâ€™ll tell you what man, those are the toughest guys I know to wear pink, and green, and all these loud, obnoxious colors. I donâ€™t think thereâ€™s anything feminine about those guys, I think they all had us fooled.

MSL: Now is it possible, that we could maybe see you, Steve Madison, busting out some pink trunks in the future?

MSL: Are they being made as we speak?

SM: No spoilers, but it would definitely be in the works. And the Heartbreak Express too, donâ€™t leave out Black Market, because they came in, and Black Market and I, weâ€™re buddies too. Thereâ€™s a little dissension in there still, I dunnoâ€™ how this is all gonnaâ€™ turn out.

MSL: Now, Iâ€™ll be honest Steve. I think youâ€™re kindaâ€™ lucky, to have gotten out of the YRR when you did. Because if you think about it, theyâ€™ve got a lot of guys gunning for them! Theyâ€™ve got Black Market and Heartbreak Express, two teams that have gone tooth and nail in the past, and now have kindaâ€™ joined forces against the YRR. Not to mention yourself.

SM: And myself, Seth Delayâ€™s there too. But like you said, Black Market and Heartbreak Express, those guys had a bloody war, a bloody fued, and a lot of people came to see those guys beat each other up. And now, you stick â€˜em together on one side, and with some of the stuff that I have done, YRRâ€™s gonnaâ€™ be in some trouble here. I wouldnâ€™t doubt to see some new people start popping up, these hired guns. I was part of the YRR, part of that decision making process.

MSL: So you know how they think.

SM: Yeah, I know how they think. I know those guys, theyâ€™re conniving, and theyâ€™re smart.

MSL: For people that donâ€™t know the connection with Seth Delay, just like in years past, you were in a tag team with Erick Stevens, Chasyn Rance, when he first came into FIP, was tag team partners with Seth Delay. They had a lot of success in the tag team ranks, never could get those titles, though. And I donâ€™t think Seth Delay has forgotten what Chasyn Rance did to him, turning his back on Seth Delay.

SM: Sal Rinauro too, Sal Rinauro and Seth Delay. They have a little bit of history too. Seth Delayâ€™s always been in the thick of things with those guys. I think if Chasyn would have stuck with it, you know. But at the same time, Chasyn and Seth fizzled out at the same time that Erick and I fizzled out. And it was the writing on the wall. Chasyn and I just kindaâ€™ aligned forces together. Sethâ€™s a tough guy, but I think they could have done well together.

MSL:Â  Now that youâ€™re on your own here in FIP, not a member of Heartbreak Express or Black Market, but Iâ€™m sure they have your back a little bit. What does the future hold, for Steve Madion, here in Full Impact Pro Wrestling?

SM: Iâ€™d like to say I have everything planned out. But right now I just want to take care of the YRR, and take care of that. And when thatâ€™s over with, keep going up, up, up. Of course, a title shot. Iâ€™d like to work with Roderick again, heâ€™s the current champ. And, weâ€™ll see how it goes. Just got my mind set on the YRR right now.

MSL: Well Steve, weâ€™re certainly glad to have had you on FIP Radio. We hope you are able to politick your way to that title shot at some point.

SM: Thatâ€™s all itâ€™s about right there. Politicking.

SM:Â  Absolutely man, I love hearing myself on the radio.

MSL: But Steve and I are actually going to go drinking now, heâ€™s gonnaâ€™ drink me under the table.

MSL: Weâ€™re gonnaâ€™ take a quick break, and weâ€™ll be right back, on FIP Radio!