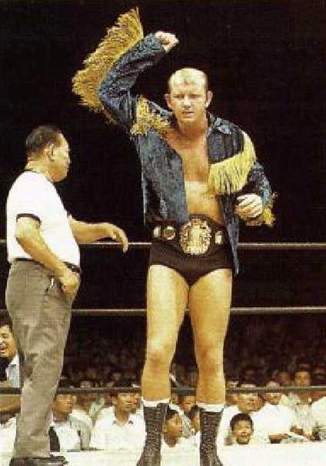 My final match in wrestling will take place Saturday March 1st, 2008 in Tokyo’s Sumo Hall. It will be as real and memorable as February 11, 1969, the day that changed my life forever when I won the NWA World Championship from Gene Kiniski.

My thanks to Keiji Mutoh, President of All Japan Pro Wrestling (aka Great Muta in America in the days of WCW) for hosting my final wrestling match.

I would also like to thank the wrestling fans in Japan who have stayed with me for so long and have never forgotten the good times we shared together.

In 1973, Giant Baba formed his own company, All Japan Pro Wrestling. His associate for booking of American Wrestling talent was my Father, Dory Funk Sr.

I also will never forget All Japan Pro Wrestling’s 20th anniversary Six Man Tag Team main event as Giant Baba, Stan Hansen and Myself faced Jumbo Tsuruta, Terry Gordy and Andre the Giant in what would prove to be Andre the Giant’s last match.

Now comes the 35th anniversary of All Japan Pro Wrestling. Masanobu Fuchi, one of my students is the only wrestler who has been with the company from the beginning.

Osamu Nishimura originally trained by Hiro Matsuda and with the passing of Matsuda came to the Funking Conservatory and asked that I be his teacher will be my partner in many of the “Final Countdown” of the last ten of my career wrestling matches leading up to the final match at Sumo Hall.

Next week there will be a press release naming a !BANG! TV Star from the Funking Conservatory who will be wrestling for All Japan Pro Wrestling, starting with the next tour in Japan which begins at Korakuen Hall on February 17,2008.

The next taping of !BANG! TV comes to the Funking Conservatory this Sunday January 27th. Showtime is 7:00pm and the doors open at 6:00pm.

Tickets to our show, training schedules and information and information on the upcoming tour of Japan are available on our website at www.dory-funk.com or you may call 352-895-4658.