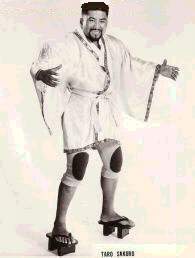 Rey Urbano was a part of the glory days of the Amarillo Territory in the mid 60’s. The top wrestling talent included The Sheik, Tokyo Joe, Ricky Romero, Nelson Royal, Sputnik Monroe, Danny Miller, The Viking, Dory Funk Sr., Myself and starting in 1965, Terry Funk.

According to the Texas State Athletic Commission, Lubbock, Texas was the number one City in Texas in wrestling attendance figures.

The hottest of the heels (No pun intended) was the Sheik, the master of the fireball, and an established heel from the late 50’s, Tokyo Joe who had a previous run-in with the law and was returning from prison to professional wrestling. Tokyo Joe was the master of the deadly Karate Thrust.

After a month invested in television making Tokyo Joe the top heel featuring the deadly Karate Thrust and leaving many jobbers gurgling in their own blood and quivering in the ring. Just as Tokyo Joe was ready to face the top faces in the territory, the Texas State Athletic Commission advised us that because of Tokyo Joe’s prison record he could not appear in wrestling matches in Texas.

With all that was invested in Tokyo Joe we were stuck for a top heel.

It was my father’s idea to bring a friend Rey Urbano to replace Tokyo Joe and carry the heat established with the deadly Karate Thrust. Dad’s idea was to call him Tokyo Tom.

For the next three years, Tokyo Tom (Rey Urbano) was one of a few top heels that carried the territory. Tokyo Tom’s Karate Thrust was so over that we came up with the first Karate Collar matches and did capacity business.

Rey was a great worker who knew and understood his Karate gimmick and along with the Sheik and his Ball of Fire the Amarillo Territory had a run of fabulous business.

Rey was one of the nicest most sincere “Bad Guys” I have known. Our condolences from the Funking Conservatory to the family of Rey Urbano.

On our website on !BANG! TV we have matches of the Original Sheik throwing his fire ball and his protÃ©gÃ© Sabu throwing the fireball.

For information on our upcoming show October 28th in our New Air-conditioned Arena, Support the Troops 20, “The Great Big Show” and to find out how you can become a professional wrestler and appear on !BANG! TV, call now – 352-895-4658 or visit our website at www.dory-funk.com.