Gail Kim comes to Brooke’s side, helps dethrone the champion 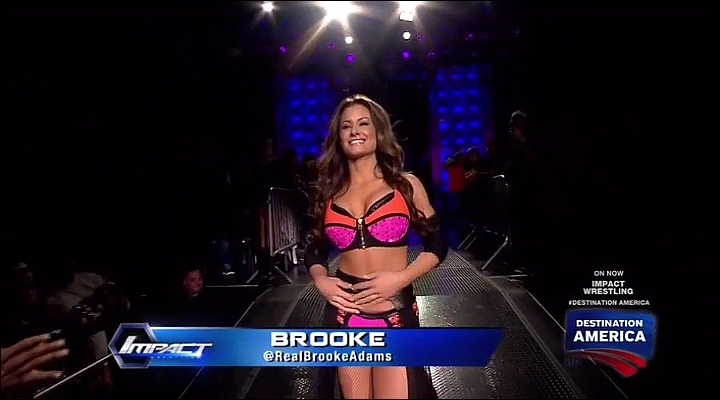 This past week on TNA IMPACT the current Knockouts champion Taryn Terrell defended her title against Brooke Tessmacher.  Read the full recap of the match below, a match that saw Brooke take the TNA Knockouts championship with a little help from Gail Kim!

Jade gets bonus points for the hound’s-tooth on her top, Roll Tide. Terrell attacks Brooke at the bell and connects with a series of elbows before choking Brooke in the corner. Terrell puts Brooke in a headscissors in the corner and then connects with a Spinning Neckbreaker for a near fall. Brooke tries to fight back with a series of forearms and then connects with a Flying Forearm. The Dollhouse trips Brooke as Terrell distracts the referee. They put the boots to Brooke and then toss her back in the ring. Terrell covers Brooke for another near fall. Terrell follows up with a Snap Suplex for another near fall and then she whips Brooke into the corner reversal. She goes for a third whip but Brooke counters it into a Russian Leg Sweep for a near fall. Brooke tosses Terrell into the corner and hits a Running Clothesline. Brooke goes for the Falling Facebuster, but Terrell blocks it and then hits a Missile Dropkick off the top. Terrell follows up with an attempt at the Taryn Cutter, but Brooke blocks it and hits a dropkick. Brooke goes to the apron but the Dollhouse distracts her allowing Terrell to knock her off the apron. Terrell puts the boots to her and then slams her face into the apron. Terrell slams Brooke into the ring steps before choking her with her boot. Terrell rolls Brooke back in the ring and then she climbs up top and dives off with a Flying Cross Body for another near fall. Terrell covers Brooke again and again only gets a two count. Terrell screams at Earl Hebner and then goes to pick Brooke up but Brooke catchers her with an inside cradle for a close near fall. Terrell gets back up and kicks Brooke before climbing up top. Brooke dives off the top but Brooke moves out of the way and then hits a Running Clothesline. Brooke hits another clothesline and then a back elbow followed by a Running Forearm. Brooke Spears Terrell and then climbs up top but Jade shoves Brooke off the top as Marti distracted Hebner. The lights go out and when the lights return Gail Kim is standing over a laid out Marti Bell on the floor! Gail hits a beautiful spinning headscissors sending Jade into the ring post! Gail then hits a 619 around the ring post on Jade! The lights go out again and Gail is gone! Terrell turns around right into the Butterface Maker from Brooke! 1…2…3!