Gene Kiniski, “Give Him Hell Kid” 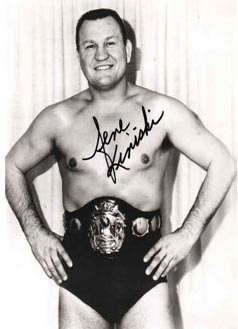 Gene Kiniski, “Give Him Hell Kid”

Giant Gene Kiniski  caught me with a double leg pick-up and spun me around in a “Giant Swing” (Grabbed me by the ankles and spun me 360 degrees around and around). I could see the ring light at the Amarillo Sports Arena spinning overhead then I nearly passed out but came to as Gene slowed the Giant Swing and dropped me to the mat. Gene jumped on top of me with a rear chin lock and said, “Here comes your mother, kid. She is coming to help you. Dorothy is coming to ringside.”

Gene Kiniski was 6’ 5” tall 280 pounds of perpetual energy trained by my Father, Dory Funk Sr. We wrestled that night at the Amarillo Sports Arena to a one hour draw. I have often said that match with Gene Kiniski was one of the most demanding athletic events I have ever participated in.

Vancouver British Columbia 1963 – I wanted to be spectacular in the Battle Royal, “Impress the promoter.” I was in the corner on the top rope with Tex McKinzie and Mike Sharpe in front of me, both 6′ 9″ tall. From the top rope I jumped over the top of them. As I jumped, Mike reached up and grabbed at my leg, throwing me off balance. In an effort to land standing in the middle of the ring I reached for the floor with one leg only. As I landed, I could feel my knee break to the inside.

The next morning I was in the doctors office. He said, “Check in the hospital tomorrow and we will do surgery.” Disappointed and Dejected, I called promoter, Rod Fenton to give him the bad news. Fenton said, “Before you have surgery, call Gene Kiniski. I didn’t speak much to Gene, I just listened. “Kid, go to a sporting good store and buy some tough skin, some tape, and long wrestling tights. Shave your leg and show up for the show one hour ahead of time.” I did what he said.

That night I had to cover up and sneak in the back door. I was on the main event and couldn’t let the wrestling fans see that I couldn’t walk. Gene was there one hour ahead of schedule. He taped my leg tight as a cast from top to bottom, then said bend it till you get a slight tear in the tape by your knee. As Gene left the room, he growled, “Okay kid, I will see you in the ring.”

Gene Kiniski was there every night that week one hour ahead of schedule to tape my knee before we wrestled, then we would go into the ring and he would whip the heck out of me but leave the knee alone. I owe it to Gene Kiniski that I did not have to have surgery on my knee in Vancouver or ever in my life and Gene may have saved my career in professional wrestling.

Gene even told me what I should give him for a present as I was leaving Vancouver to return home to the Amarillo Territory. On the way I stopped by his home in Blain Washington with a 5th of Crown Royal.

When I first came to St. Louis, Gene Kiniski would tell me, “Listen Kid, I don’t want to catch you staying at the Claridge Hotel or at the Senator Hotel where all the other wrestlers stay. You stay at a first class hotel, the Jefferson Hotel over on 12th street. I want to always see you in a suit or a sport coat. If you are going to make it to the top, you have got to dress and live like you are at the top. When you go into the ring, I want to see some wrestling holds, not just meat chopping. The sign out front says wrestling and that is what people want to see.” Gene was my mentor, advisor and at times caretaker.

February 11, 1969 in Tampa, Florida I won the NWA World Championship from the man who saved my career Gene Kiniski. No one could be prouder of my career as NWA Champion than Gene Kiniski.

1996 – WCW Slamboree show in Atlanta – Gene was my manager in the legends match against Nick Bockwinkel with Verne Gagne in Nick‘s corner. As we walked into the ring at the Omni, Gene had his arm around my shoulder, still the boss and still telling me what to do. As we came to the center of the ring, He stopped, looked at me and said, “Look up, pointing to the top of the Omni Arena, “Your father is up there looking at us now. Do you see Nick Bockwinkel over there?” “Give Him hell Kid.”

Gene Kiniski was a legend in the wrestling business as NWA World Champion and as a friend I can never thank enough for the guidance he was willing to give.

My condolences to Kelly, Nick and the family of Gene Kiniski.