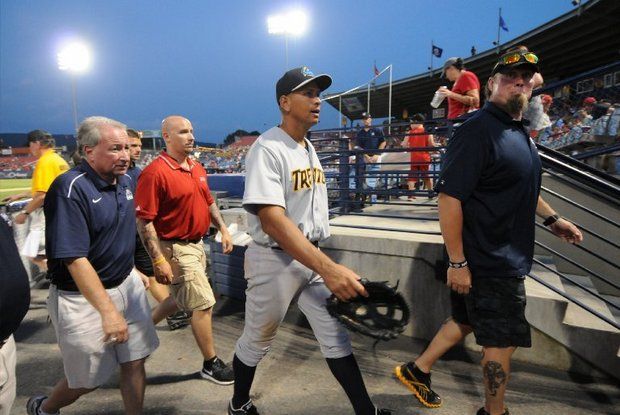 Editor’s note: This article originally appeared on www.NJ.com and was written by Andy McCullough of the The Star-Ledger.

READING, Pa. — The side door opened at 5:48 p.m., and Alex Rodriguez jogged across concrete toward a Double-A diamond. A moment after a few fans called his name, a cascade of jeers rumbled from the fans gathered at FirstEnergy Stadium. Rodriguez out-ran the catcalls onto the field.

Soon after, a five-man security detail assembled along the third-base line, eyes focused on the highest-paid player in baseball. They were an athletic director, a principal, a teacher, an owner of Harley-Davidson dealerships and a professional wrestler — a beefy, inked-up group of men tasked with one objective.

“Our detail is strictly A-Rod,” said Gene Snitsky, who worked for World Wrestling Entertainment from 2004 to 2008. “Wherever he goes, we go.”

Snitsky cuts a distinctive figure. He stands 6-8 with a frame that carried 300 pounds in the ring. An auburn goatee covered his chin; dark shades shielded his eyes. In the WWE he was a heel, a bad guy who once pretended to punt a child into the crowd during a television segment.

He understands how to generate “heat,” the wrestling parlance for disdain from fans. He was asked to rate the reception for Rodriguez, the Yankees’ erstwhile third baseman and one of baseball’s most controversial figures, before he went 0-fo-3 with an RBI and seven innings in the field as he rehabbed from hip surgery at the home of Philadelphia’s Double-A affiliate.

“On a scale of 1 to 10, I’d say maybe a 7.5,” Snitsky said after Rodriguez flied out in his first at-bat Tuesday night. “It’s not quite as bad as I expected, to be honest with you. I expected it to be a lot worse.”

The group tracked Rodriguez on a day when his cloudy future received a dose of clarity. Even if Major League Baseball suspends Rodriguez for his role in the Biogenesis scandal, Rodriguez can return to the diamond this season if he chooses to appeal. The MLBPA is confident the suspensions will not be enforced until 2014, union chief Michael Weiner said at a Manhattan luncheon Tuesday.

The exact lengths of the Biogenesis suspensions have yet to be determined, Weiner said, and the suspensions could last anywhere from “five games or 500 games.” The appeals process would not begin until September.

Thus the only major impediment to Rodriguez’s big-league return appears to be his 37-year-old frame. His rehab assignment ends Sunday. He will spend today here. It is unclear if he will play. But he’ll still be flanked by members of the organization’s training staff, with the security detail not far behind.

The Fightin Phils found out about Rodriguez’s impending arrival over the weekend. The organization has previously assembled extra security for Chase Utley, Shane Victorino and other rehabbing Phillies. Matt Hoffmaster, the team’s former director of group sales, who now runs the athletic department at Muhlenberg Senior High School insists nothing can match Pedro Martinez’s one-night stand here in 2009.

Kevin Kodz, the Harley dealer, received a call Saturday night from Scott Hunsicker, Reading’s general manager. Hunsicker invited Kodz to come this week, and to bring his friend, Snitsky, who lives about 45 minutes away.

“A really laid-back personality,” Kodz said. “It was really cool. He shook all of our hands and said ‘Hello.’”

Read the rest of the story here: