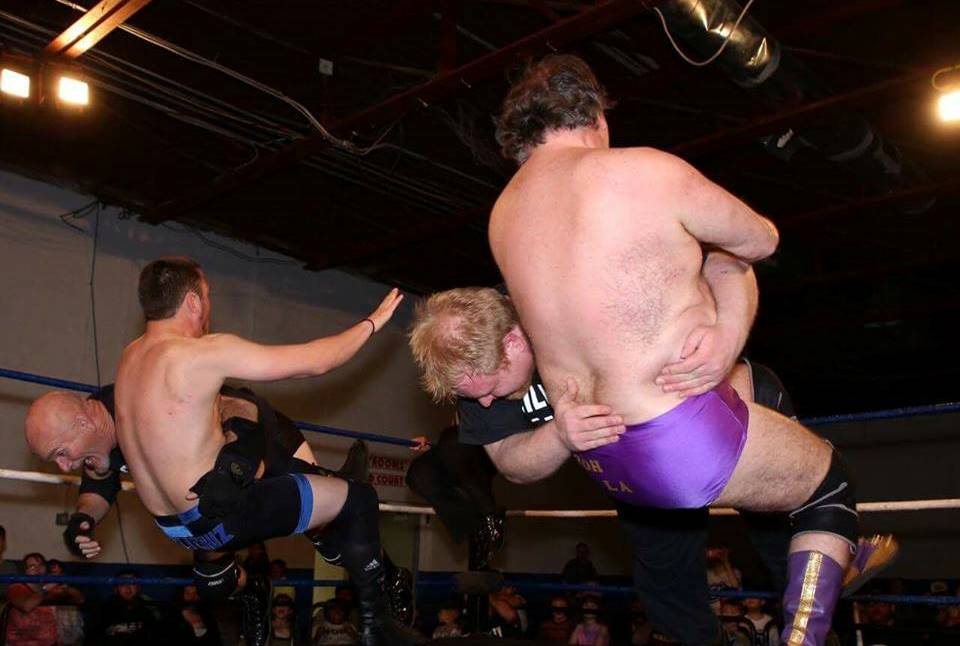 Dynamite Championship Wrestling presented DCW’s “Guts and Glory 14” this past Saturday night in front of a wild crowd in Milford, DE.  All of DCW’s titles were on the line, and DCW Chairman David Kline tagged up with former WWE light heavyweight champion Gillberg to challenge Mr. Cruz and Mr. Ooh La La.

Full results are shown below, courtesy of Robbie Blizzard, and photo credit to Andre Smith:

Raymond Dauger with Annibelle Stackhouse defeated Kid America by submission.
“The Mapleleaf Machine” Kao Storm with Courtland Bedard defeated Killian McMurphy by pinfall to retain the DCW No Limits Championship.  As a result, Killian McMurphy must leave DCW forever.  After the match, Kao Storm declared he would defend the DCW No Limits Championship “24/7”, which brought out DCW Social Media Director Kevin Brittingham.  Kevin then said Kao was going to defend it in a second match right away, against Kevin’s chosen opponent – “The Human Terminator” Marcellus Prime!
Marcellus Prime defeated “The Mapleleaf Machine”Kao Storm by pinfall to become the new DCW No Limits Champion.
The Classics (Tyler Stone and Eric Martin) defeated Joe Kerr and “New Age Nasty Boy” Adam Ugly by pinfall to retain the DCW Tag Team Championships.  After the match Joe Kerr blamed Ugly for the loss and left his partner in the ring.
“Heart Killer” Chris Wylde defeated “The Prince of Puerto Rico” Damian Adams by submission in a special “Respect” match.  The loser, Adams, had to then declare his respect for his opponent.
Kacee Carlisle defeated “The Garden State Goddess” Tasha Steelz by pinfall to retain the DCW Divas of Dynamite Women’s Championship
David Kline and Gillberg defeated Cruz La La (Mr. Cruz and Mr. Ooh La La) by double pinfall.  Previously, during intermission Gillberg was attacked by tonight’s opponents who thought, at the time, they had injured him and put him out of action.  This match initially started as a handicap match, until Gillberg made a heroic return and helped score the victory.  As a result,  Mr. Cruz is NOT reinstated as DCW Commissioner.
Omega Phoenix defeated Swayze in a brutal Casket Match.  During the entire match, Raymond Dauger was hiding in the casket and he came out to help Phoenix get the win.  Then Zac “The Ripper” Conner came out to “help”, but he and the others hit Swayze with a triple power bomb! Joe Kerr came out to try to save Swayze and he got a triple power bomb as well.
“The New Standard” Cory Kastle defeated Breaker Morant by pinfall to become the new DCW Heavyweight Champion.
Related ItemsdcwGillberg
← Previous Story Former WWE CWC Competitor Next Entrant in 2017 ECWA Super 8
Next Story → Former WWE Champs to Challenge the Punk Rock All Stars