Nashville (July 29, 2009) — When they tune in to watch Ted Nugent’s new reality-competition series, fans of the right-wing rock star and outdoorsman may just discover a new favorite hard-rockin’ and tough talkin’ star — and she’s a chick. 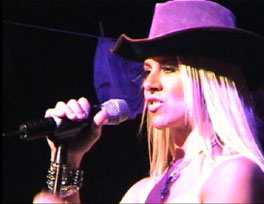 Goldy Locks is a ton of dynamite packed into a deceptively diminutive frame; a living, breathing exercise in contradiction. An intellectual and a hottie, if Goldy weren’t so darned likeable, you’d hate her.

She’s a guitar-slinging songwriter and lead singer of the nationally touring rock band that bears her name. Goldy spent 5 years as a professional wrestling personality and designs her own line of clothing and leather wristbands, which were worn and featured on Nugent’s show. Oh, and she plays 3 instruments and sings in five languages.

The magic didn’t escape producers of “Runnin’ Wild … From Ted Nugent” who quickly signed the rock star entrepreneur to appear as a contestant on the TV show.

A little girl who grew up tough and determined, Goldy nearly met her match under circumstances that found her sleeping out in the rain and foraging for food and water while fighting an infection and fever that reached 104 degrees. She broke 2 ribs while making the episode.

“I should’ve been propped up and medicated in bed,” she says, tossing her signature gold mane with a laugh. “Instead, I’m running through the wilderness, eating maggots and grubs with Ted Nugent on my ass.”

CMT has ordered eight episodes of “Runnin’ Wild … From Ted Nugent,” which premieres in September. Each episode will feature Nugent instructing competitors on one of what he calls the “Big Five of Survival,” including the psychology of survival, shelter, water, fire and food. Competitors face an obstacle centered on that skill and then try to survive while Nugent and his son Rocco hunt them down.

Needless to say, Goldy survived … just as she always does.

Goldy’s accessory line is called The Factory. The artisan leather wristbands are manufactured in the US and sold worldwide. New “baby rocker cuffs” are all the rage at boutiques and Goldy has been approached by national retailers to carry The Factory Line. For more information, visit http://store.thefactorybygoldylocks.com/ 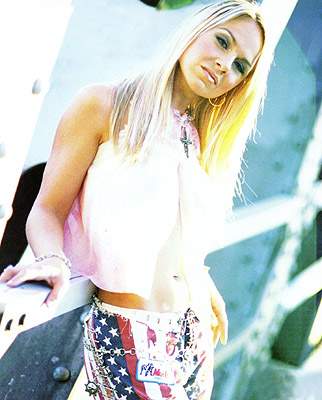