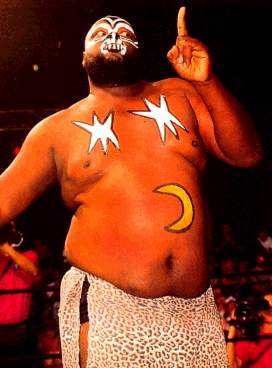 *This was GCW’s 100th live event. An amazing show!

1) Consequences Creed def Amazing Darkstone [4 min]
Creed came out to the ring to huge cheers but quickly turned fans against him by describing Oshawa as “the most illiterate backwoods place I’ve ever seen in my life!” A short but competitive bout that saw the TNA star steal the win by holding the ropes for leverage during the pin.

– Anthony Darko came to the ring and said that he’d supported GCW on his back during hard times and was responsible for making it the great company that it was. He said that he should have been given something special for the 100th show but instead promoter David Wyldstar said he had a match with “The Million Dollar Bodyguard” Virgil. Darko said that wasn’t good enough and demanded he be given a shot at a GCW title or he wasn’t going to do anything. To everyone’s surprise, GCW WILD Champion PJ Tyler came out to the ring to give Darko a shot at her title…

3) GCW WILD Championship:
Anthony Darko def PJ Tyler to win the title [5 min]
Darko got some shots in early but PJ controlled most of the match hitting, among other things, an amazing titl-a-whirl headscissors takedown, a ‘rana off the top turnbuckle, a spiked DDT out on the floor and a sweet top rope crossbody. Unfortunately for her, Darko blocked a monkey flip attempt and pinned her with his feet on the ropes to win the match and the title.

After the match Darko ran back into the ring and attacked PJ but was thwarted by Virgil who quickly locked on the Million Dollar Dream. Tyler did the arm check as fans counted 3 and Darko slumped unconscious to the mat. The “Million Dollar Bodyguard” rolled Darko over and told PJ to cover him while he counted the 3 but this little impromptu “match” did little to change the official result and Anthony Darko remains the GCW Women’s Champion

– Jamie Virtue was introduced to fans and began talking about how he had brought Sebastian Suave to GCW 3 years ago, taking him under his wing and making him the star he is today. Virtue said he was still pissed that Suave turned on him 3 months ago at “Season’s Beatings” by giving him a pedigree. Virtue called Suave out to the ring and said he was going to kick his ass. Suave showed up dressed in street clothes and said that Virtue had brought him to GCW and for the first couple of years he was happy with having him as a manager but last year he began to listen to the fans that were telling him he didn’t need Virtue and that he was holding him back. Suave said he’d finally had enough and that’s why he gave Virtue a pedigree at “Season’s Beatings” and was certainly willing to give him another one tonight. He didn’t get the chance however as “Rock Steady” Alex Vega ran out and attacked him from behind which immediately led too…

4) Sebastian Suave def “Rock Steady” Alex Vega w/ Jamie Virtue [5 min]
Packed with action from bell to bell. Impressive showing from the rookie Vega but even with Virtue’s guidance and interference he couldn’t avoid getting hit with Suave’s pedigree and pinned. After disposing of Vega Suave invited Virtue into the ring but was again attacked from behind, this time by Scotty Turner. Suave survived the inital attack and was setting up for the pedigree when Virtue jumped in the ring and nailed him in the back with his cane. Turner hauled Suave up so Virtue could show him “what happens to people who cross me” and slapped him in the face. Virtue then told fans that Scotty Turner was their real savior and the two left the ring. Suave got to his feet as they were leaving and said “Virtue, as long as I’m breathing this is far from over! When all is said and done, for all of these people, I’m going to pedigree your ass!”

5) Cody 45 & JT Playa def The Pro Stars (Josh Alexander & “The Definition of Tricked Out” Tyler Tirva) [17 min]
Another great match that saw the advantage switching back and forth. Playa & 45 used ref distractions and cheats at every opportunity but The Pro Stars started to take solid control late in the bout. Tirva was in against 45 and setting up for his running DVD when Alexander slapped his back to tag himself into the match and he jumped on Cody for the pin after Tirva hit the move. 45 kicked out and The Pro Stars began arguing with each other. This enabled Playa & 45 to regain the upper hand as all 4 were in the ring. Cody rolled up Tirva as Alexander dumped Playa and when Josh turned and saw his partners predicament he rolled the two over so it was Tirva making the cover before heading back towards his corner. 45 kicked out of the roll-up sending Tirva crashing into Alexander effectively chop-blocking his knee. Josh went down hard and was unable to prevent Playa & 45 from destroying Tirva with a combined elevated cutter to win the match.

After the bout Tirva & Alexander again had words and Tirva gave his partner a bit of a shove before starting to leave the ring. Alexander kicked the 2nd rope up into Tirva’s nards, dragged him into the ring and gave him a TKO before leaving the ring on his own. Tirva had to be helped to the back by officials and support staff.

6) Main Event: 6 Man Tag:
Cody Deaner, Crazzy Steve & “The Ugandan Giant” Kamala def Jake O’Reilly, Primo Scordino & “Highlander” Robbie MacAllister [17 min]
Fantastic match to end the show. Tons of great comedy, action and brutality. Way too much to describe here. A “must see” – get the dvd. Kamala, Deaner & Steve won the bout by stacking the 3 bad guys against the turnbuckles and all hitting a running splash, Kamala’s last. Primo toppled to the mat with Jake & Robbie both falling on top of him. The good guys all piled on top for a multi-man pin to win the match. After the bell Jake was left alone in the ring and given a stunner by Deaner, then another by Steve and a third by Ref Cassidy… a little payback from the official for all the abuse he’s suffered at the hands of the Irishman over the last few months.

Fans left the building buzzing about what a great show they’d just seen.