Home / WWE / GUEST COLUMN: “WWE Has Booked Itself into a Corner with the Randy Orton vs. Daniel Bryan Main Event” by David Bixenspan

GUEST COLUMN: “WWE Has Booked Itself into a Corner with the Randy Orton vs. Daniel Bryan Main Event” by David Bixenspan 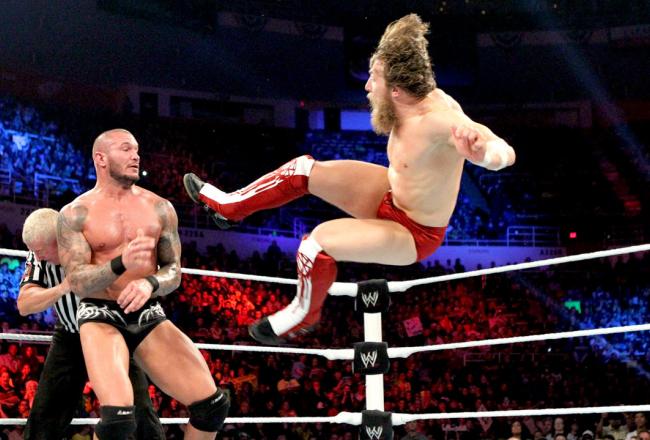 Editor’s note: This column originally appeared on www.bleacherreport.com and was written by David Bixenspan.

WWE’s first-ever (first annual?) Battleground pay-per-view event is this Sunday, and as of this writing, it feels fairly cold for a WWE PPV.

Night of Champions was WWE’s first bad show in a long time. Battleground is coming too soon, and of the three announced matches so far, two are Night of Champions rematches.  The lion’s share of online discussion I’ve seen of the main event has been centered around what exactly the finish of the Randy Orton vs. Daniel Bryan main event will be.

The McMahon family storyline is, in one way or another, carrying WWE through WrestleMania 30, and Bryan vs Orton has been the most pushed feud in that overarching story.  It doesn’t really feel ready for a big climactic moment just yet, but that might not matter at this point.

Setting aside the fact that I’m sure WWE has other ways to get the McMahon-related stuff to WrestleMania, they risk alienating the fans too badly if Bryan doesn’t win the vacant WWE Championship and actually get to keep it this time.

Bryan has won the title twice only to have it unfairly torn from him.  At SummerSlam, Triple H attacked him after he beat John Cena, allowing Randy Orton to cash in Money in the Bank, while at Night of Champions, he “knocked out” and beat Orton, but referee Scott Armstrong fast counted the pin so the decision could be reversed.  One more would be a third strike: Daniel Bryan will never get a fair shake and never get to keep the title, so why should I be invested in him?

Realistically, WWE has two options for the match at Battleground:

Orton wins or there’s no decision, leading to a Hell in a Cell cage match at Hell in a Cell where “there must be (real) winner” and Bryan wins the title for real there.

Option No. 1 is the less risky of the two.  Bryan gets the belt, Bryan keeps the belt on Raw, and then you start the era of Daniel Bryan leading into Hell in a Cell.  He’s finally the real champion, fans don’t feel ripped off anymore and he further solidifies the title reign by beating Orton at Hell in a Cell.  Everything is right in the world.

As for option No. 2, with three PPVs so close together, WWE needs a good hook for Hell in a Cell beyond “the main event is a Hell in a Cell match.”  If you basically guarantee that Bryan is winning the title because of the stipulations, that could, in theory, do the trick.

In practice?  I’m not so sure.  Just a few weeks ago, at Night of Champions, CM Punk guaranteed he would be beating up Paul Heyman, and it didn’t exactly happen that way.  You can’t go to that well too quickly, so nobody would be able to guarantee anything on TV building up the show, instead just hinting at it strongly.

Perhaps more importantly, last year’s Hell in a Cell show was built around how the main-event Hell in a Cell cage match had to have a real winner.  It was originally scheduled to be CM Punk defending the WWE Championship against John Cena after a double pin draw at Night of Champions, but Cena was injured.  Ryback replaced him, and that was where everything went wrong.

Ryback was in the middle of an undefeated streak.  CM Punk was in the middle of the longest WWE Championship reign in the last 25 years and set to defend the title against The Rock at the Royal Rumble.  Like this year, WWE had booked themselves into a corner, and with hindsight, they clearly shouldn’t have put Ryback in the match.

In the end, Punk needed it more, so they had referee Brad Maddox turn heel to help Punk cradle Ryback while fast-counting him.  Ryback lost his momentum and is only starting to regain some ground now.  The moral to this story is that the idea of Hell in a Cell being a match where there must be a real winner has been severely compromised, and it’s probably best to wait at least another year or two before doing that again.

My advice?  Just give Bryan the belt at Battleground and have him retain it in a grueling main event at Hell in a Cell to win a three-match series with Orton.  Anything else and the fans will be too wary of feeling ripped off.

— David Bixenspan has been Bleacher Report’s WWE Team Leader and a contracted columnist since 2011. You can follow him on Twitter @davidbix and check out his wrestling podcasts at LLTPod.com.