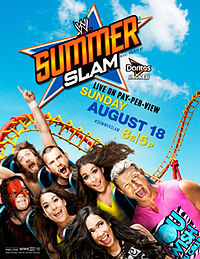 Editor’s note: This article originally appeared on http://bleacherreport.com and was written by Drake Oz.

WWE SummerSlam 2013 is just about a month away, and even without any matches made official for the show, it’s already shaping up to be yet another great 2013 pay-per-view.

The WWE has done a fantastic job of putting on some tremendous PPVs this year, and as a result, there are plenty of superstars who are making a bigger impact on the company than they have in quite some time.

With quality PPVs coinciding with quality angles, the WWE is on quite the roll these days, and not coincidentally, so are its superstars.

Daniel Bryan is on fire. Cody Rhodes has more momentum than ever. Damien Sandow is Mr. Money in the Bank. Plenty of other stars are making big splashes as well.

At SummerSlam, more stars will join that list if they can deliver a memorable performance at one of the WWE’s biggest PPVs of the year.

Just who will manage to do so?

Let’s take a look at which superstars will make the biggest impact at the upcoming SummerSlam pay-per-view.

One of the main events of SummerSlam is going to pit Brock Lesnar against CM Punk in a battle of “Paul Heyman guys.”

Heyman turned on Punk at Money in the Bank, so he’ll be in Lesnar’s corner as two of the biggest stars in the industry battle it out on the big stage of SummerSlam.

Quite frankly, it wouldn’t even matter if Heyman wasn’t involved in this feud. Lesnar is bound to make a huge impact at the pay-per-view anyway because, well, because he’s Lesnar.

It hasn’t mattered much that Lesnar is a mediocre 2-2 since his return. It hasn’t mattered that his feud with Triple H wasn’t very good. The WWE fans react to him like a major star every time they seem anyway.

Because Lesnar isn’t around very often, it’s seen as a big deal every time he’s simply around and an even bigger deal when he wrestles. That will remain true at SummerSlam.

Lesnar’s presence alone will create an incredible atmosphere at SummerSlam, but perhaps more importantly, no other superstar on the card will spike the PPV’s buyrate as much he does.

He’s one of the biggest PPV draws around, and beyond just the impact he’ll have inside the ring, he is bound to send the SummerSlam buyrate through the roof.

As we found out on this week’s Raw, Daniel Bryan is going to face John Cena for the WWE Championship at SummerSlam in a match that will be the biggest of his career.

Bryan has been the WWE’s hottest superstar for more than a year now, and he’s finally getting a chance to compete against the company’s top star for its most prestigious title on one of its biggest PPVs.

This is undoubtedly a major moment in the career of Bryan, who has gotten so over that you could argue he’s more popular than anyone in wrestling right now, even Cena.

If ever there was going to be a time that the WWE should have Cena lose cleanly and put someone over, this is it. It’s a golden opportunity to make Bryan into an even bigger superstar than he already is, and the WWE needs to take advantage of it.

The importance of this match for Bryan can’t be overstated. Win or lose, his involvement in this bout is something that’s going to make a huge impact on the WWE.

But if he does the unthinkable and actually beats Cena, then Bryan could do what no one thought was possible: Replace Cena as the No. 1 star in the WWE.