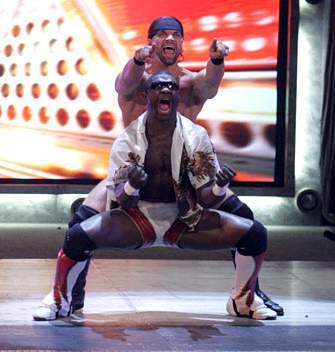 Wrestling’s Greatest Tag Team (Charlie Haas & Shelton Benjamin) Discuss Their Decision To Come To Ring Of Honor, Reuniting This Saturday Night At Glory By Honor IX, Why Failure Is Not An Option In Their “Dream Match” vs. The Kings Of Wrestling, The Likelihood Of A Long-Term Future In ROH, & The Message They Would Like To Send Out To The Wrestling World

Charlie & Shelton (in his first post-WWE comments) joined The Big Mosh & “The Chairman of the Board” Todd Vincent for their first joint appearance on “Your Home of Wrestling Radio” (to promote Ring of Honor’s return to Internet Pay-Per-View, Glory By Honor IX, on September 11th at The Manhattan Center in New York City), which is now available in Windows Streaming Media or via Monday Night Mayhem’s official Podcast on iTunes:

The reasons why Charlie & Shelton decided to come to Ring of Honor to reform their successful tag team and how ROH is the right place for both of them to showcase their talents together: (Charlie) “Let me put it this way…no ass-kissing politics. How about that? That’s a good way to start. I don’t have to worry about kissing anyone’s ass, walking on eggshells, I don’t have to worry about the politics, or the backstabbing, or the cut-throat from the creative. That’s one reason why.” (Shelton) “In my case. I thought it would be fun. If I’m gonna tag, it’s gonna be with Charlie, and that’s in Ring of Honor. They’ve done awesome things for the tag team division, and my hat’s off to the organization for that. What better place to showcase Wrestling’s Greatest Tag Team than in a place with the best tag team division in the world right now quite frankly.”

Their response to The Kings of Wrestling’s exclusive interview on Monday Night Mayhem last week, saying that Wrestling’s Greatest Tag Team may indeed show signs of “ring rust” after not teaming up together for some time, plus what advantage they believe Chris Hero & Claudio Castagnoli will have in their “Dream Match” at Glory By Honor IX: (Charlie) “They’re saying we need to be well-rounded for them? I don’t think you could two better well-rounded athletes that know more than just wrestling. I’m talking about every types of hold: every counter hold, every reversal, every re-reversal. You name it, we’ve done it. We’re the ones that really put tag team wrestling back to where it should be when we first introduced as Team Angle. We put wrestling into the marquee name. They’re both big, they’re both creative, but they can’t wrestle. When it comes down to it, there’s no one more that I trust going into a dark alley or into a wrestling match than with Shelton, because I know him like the back of my hand. He’s my best friend, he was the best man at my wedding, so I know definitely that there will be no ‘ring rust.’ We’re both top-tier Division I athletes. You just don’t get that all of a sudden. We were born with the “it-factor,” and we’ve had the “it-factor,” and that’s that.” (Shelton) “The misconceptions of youth…As far as The Kings of Wrestling go as the Ring of Honor Champions first & foremost: Anytime any wrestling organization is willing to put titles on you, that says a lot about you and that says a lot about the confidence that company has in you, your abilities, what you’ve accomplished, & the future that they see for you. Whether it be WWE, Ring of Honor, TNA, or any other organization on the planet, to me, if you’re a champion in that organization, that speaks volumes, so for me, that commands respect, because you had to bust your ass to get those titles. No matter what, when I step in the ring every day (be it a tag match, be it a singles match, be it a Triple-Threat Match or Ladder Match), my goal every time I step into the ring is to be the best that I can be every time. Shelton Benjamin & Charlie Haas are never laxed. Shelton Benjamin & Charlie Haas are always on their ‘A-game.’ The advantage that The Kings of Wrestling has is home team advantage. We are stepping into their yard, and where I’m from, if someone steps in your yard and they pick a fight, you beat the hell out of them…and that’s what I expect them to do. With that in mind, when we step into the ring with The Kings of Wrestling, there will be no ‘feeling-out’ process. We are going to bring it to them.”

The message they would like to send out & the statement they wish to deliver to the wrestling world when reuniting this Saturday night at The Manhattan Center in New York City: (Charlie) “Well, first of all, I would tell Tyler Black don’t go to the WWE. No one should experience that misery. Our focus is on our match. We feel that our tag team match is our main event. This is a chance for us. We’re released & unleashed. I wish everyone else have a really great Pay-Per-View and all that, but all I’m worried about is Charlie Haas & Shelton Benjamin, us vs. The Kings of Wrestling. I could care less about what people think about us, or what they think about other people, or where they’re going, because we are going to make a statement, and the statement’s going to be made in our match.” (Shelton) “While there’s going to be a lot of eyes on that event, and a lot of big things are happening, but I’m concerned about all of that. I am concerned with going in there and being the best I have to be. As far as any messages to anyone, quite frankly, my only real message is the same message I’ve been doing for years: I consider myself one of the greatest at what I do, and I will continue to be the greatest. The people who should be paying attention already know.”

The likelihood of Charlie & Shelton staying in Ring of Honor long-term after their match against The Kings of Wrestling at Glory By Honor IX: (Charlie) “That’s a good question. Right now, that’s something we have to discuss with Ring of Honor management. Would we love to stay? Yeah. Like Shelton said, we don’t wanna prostitute this out with Shelton & I tagging all over the place and giving it a ‘watered-down’ effect. It’s a special reunion for this Pay-Per-View. We’re doing at Ring of Honor, which has built up their tag team division, which is unbelievable. We have both worked with Jim Cornette, Dave Lagana, & Kevin Kelly, and I think that they have the right management in place for us to look long-term, so maybe yeah, we’d like to continue with Ring of Honor, because I like what that have set-up & the infrastructure. Is it possible? Yes. Have we discussed it yet? We haven’t yet, but it’s not that we’re not open to it. I could definitely see us being there for a while after this Pay-Per-View.”

More is contained in this exclusive interview with Charlie Haas & Shelton Benjamin, including their candid thoughts & comments on why failure is not an option for them at Glory By Honor IX, what their fans should look for in their match with the ROH World Tag Team Champions, what they expect from The Manhattan Center crowd in New York City, which teams in Ring of Honor (besides The Kings of Wrestling) that they would like to potentially face in the near foreseen future, plus so much more! Follow Wrestling’s Greatest Tag Team on Twitter (respectively at www.Twitter.com/CharlieHaas & www.Twitter.com/SheltyB803). All roads lead to the sold-out Manhattan Center in New York City this Saturday night (September 11th), as ROH returns to Internet Pay-Per-View! The only place to see Wrestling’s Greatest Tag Team (Shelton Benjamin/Charlie Haas) & The Kings of Wrestling (Chris Hero/Claudio Castagnoli) square off against is on www.GoFightLive.tv. Order Glory By Honor IX right now, and witness one of the most important & emotional nights in Ring of Honor history! For those who can’t make it out to “The Big Apple” or watch the event online, be sure to follow all of the late breaking news & get the night’s results by following Ring of Honor on Twitter (at www.Twitter.com/ROHOnHDNet) & on Facebook (at www.Facebook.com/RingofHonor) or head on over to www.ROHWrestling.com.