Harley Race inducted to the Missouri Sports Hall of Fame 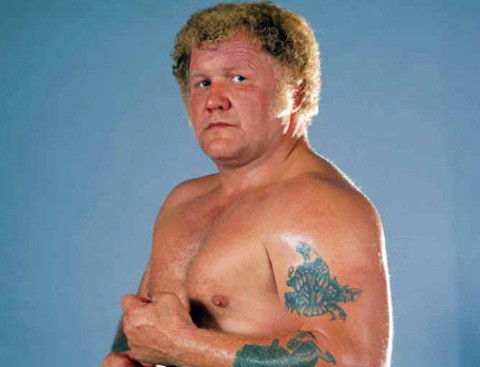 A group of aspiring professional wrestlers gather inside an old, chilly warehouse and sit around a poker-turned-dining table, swapping stories. A couple of wrestling rings nearby — one of them from the 1950s — represent two blank canvases of opportunity for this batch of 20- and 30-somethings hoping to make it big.

They talk. They joke. They laugh.

Only a few moments after the noise begins to pick up, it reverses to a complete hush when one of the toughest son-of-a-you-know-whats to ever enter the ring opens the glass front door.

“There’s Harley,” one of them whispers to a visitor. “That’s the king.”

An eight-time National Wrestling Alliance champion, Harley Race glances toward the table of his wrestling academy pupils before limping into his office — a cramped space that doesn’t seem big enough for a burly man who once went by the name “King Harley” while working for Vince McMahon and his up-and-coming pro league, the World Wrestling Federation.

Using the table for support, the king walks around to his throne — a rickety chair that creaks when he sits down. His curled, brown locks now faded to blonde and white, Race reaches into his front shirt pocket to pull out a pack of Marlboro Lights.

Race’s office is more of a trophy case than a workspace. It’s the only heated room in the warehouse that houses the Harley Race Academy, which is particularly noticeable on this 20-degree day in January.

Along with 14 others, Race will be inducted into the Missouri Sports Hall of Fame in a ceremony Sunday in Springfield. He has a wall specially reserved for such honors, including World Championship Wrestling, WWF, and NWA Hall of Fame hardwood.

On another wall, he displays pictures with well-known wrestlers and former rivals such as Ric Flair, Terry Funk and Andre the Giant. (Race maintains he’s the only man ever to body slam the 525-pound Giant, and he has a picture to prove he did it.) A third wall shows a collection of Harley Race action figures.

But no matter where you stand in the office, your eyes are drawn to a glass case above his head. It holds an NWA World Heavyweight Championship belt — the one he captured more times than any other NWA wrestler before him.

“I wish I could still be wearing it,” Race, 69, says in a slow, unvaried speaking manner. “I was the big thing in wrestling.

“You know, I never really wanted to give it up. But what choice did I have?”

A true bad boy of professional wrestling, Race takes two puffs of his cigarette, taps the ashes into a tray and begins to tell his life story. It is one of jubilation and triumph for a man who twice called Kansas City home, coupled with post-career bouts with grief, financial woes and enough injuries to allow him to place a handicap sticker on the back of his pickup truck.

One of wrestling’s longest careers was launched after a couple of rash decisions.

When Race was a freshman at Quitman High School — an ironically named northwest Missouri city near Maryville where he was born and raised — he picked a fight with two of his peers in the gym. This wasn’t especially uncommon, he says, but on this day, the school principal witnessed the entire melee.

To break up the fight, the principal placed his knee into Race’s back. Bad idea. Race turned and swung his fist, connecting with the principal’s face.

“I knocked his (behind) out,” he says proudly and without regret.

Predictably, he was expelled. He never took another academic class in his life.

Figuring he wasn’t cut out for school — “too much authority,” he said — Race moved to a farm in Savannah, a town of 5,000 just north of St. Joseph. Against his parents’ wishes, Race began training in 1958 with two Polish wrestling brothers, Wladek and Stanislaus Zbyszko.

It wasn’t quite what he expected.