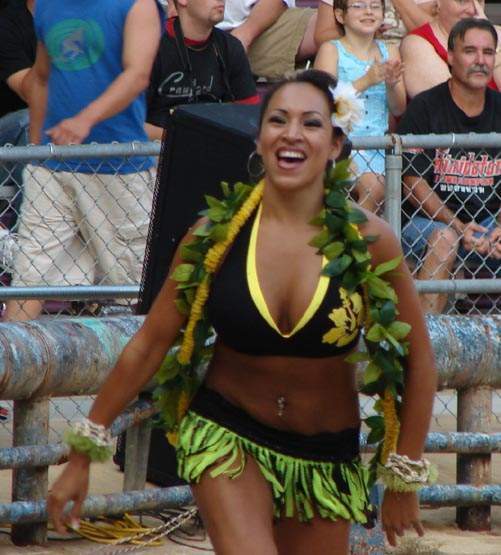 TRACY TAYLOR, who recently came home to Hawaii, from an extensive time on the mainland US working with Deep South, and as one of the WWE DIVAs, is hopeful about her future after theÂ  release from the WWE earlier this year. She is now making a huge impact working in her home town promotion, Hawaii Championship Wrestling (the AWA Hawaii) , in efforts to kick off a solid “Wahine Division” (Women’s Division) in Hawai’i.

For her opponent, HIKARU, although this will be her first time wrestling abroad, she is no stranger to the squared circle, having been a champion a few times in her home, Japan.
HIKARU is former ZERO1-MAX, AWA Women’s World, and SUN championship title holder, and is currently one ofÂ  the top “joshi” stars in Japan. HIKARU is more than ready and hungry for international challenges, and TRACY was at the right place at the right time to accept this first time ever women’s match in an HCW ring!

Here’s what both athletes had to say aboutÂ  their upcoming encounter:

“Island Girl” TRACY TAYLOR:
“I am honored to have this opportunity and this is my toughest opponent yet, I look foward to this challenge,Being that i’m a surfer girl here in Hawaii, when I’m in the water I say, “Go BIG or go home!”… when I step in the ring I say, “Go hard or go home!” Since I’m already HOME then there’s only one thing left to do……..”

HIKARU:
“I would like to thank HCW’s Linda Bade, for inviting me to Hawaii. It is an honor that I was given this opportunity to have this match in front of HAWAII’S FANS, against Hawaii’s BEST. However, you are about to see why Japanese Women’s Wrestling is considered “ICHIBAN” in the world….”

FUN for the whole family!