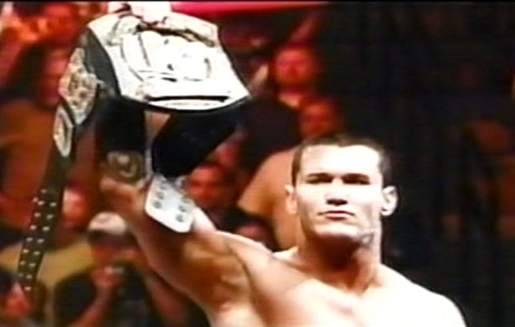 SUPERSTAR wrestler Randy Orton is in character. His minder warns Orton’s sullen and petulant behaviour is part of the act.

It is these bad boy performances and his amazing athleticism that have made Orton a history-making champion and textbook WWE villain.

But, in a candid interview, Orton, 27, dropped the grumpy facade to talk about his life in, and out, of the wrestling ring.

Q: What do you want to bring to the wrestling industry?
A: I’m young, I’m good at what I do. Hopefully, me being young and good at what I do opens the door for other people in this business who are at a young age and accelerating at a high rate. Talent like Mr Kennedy, John Cena, Bobby Lashley, Shelton Benjamin, Brian Kendrick and Paul London.
I would like to take the game away from the guys in the over 40 club –Triple H, Shawn Michaels and The Undertaker. It’s at the point where their bodies are so broken down, they can’t really hang with the younger guys. We have our injuries, we make our mistakes – personal and professional – and we learn from them. What I would like to bring to the industry is the next generation of men and women to represent athleticism, attitude, charisma, and the overall perception of being young talent as opposed to (laughs) old, balding talent.

Q: What do you want to bring as a 1-on-1 fighter?
A: Whether I’m winning or losing, I’d like to leave all the fans believing I was the most talented in the ring. We all know it’s entertainment. It’s not necessarily real. You get hurt a lot, so it’s not fake, but at the same time, we go out there and bust our humps to put on a good show. I feel this younger generation can bring to the table a more intense, aggressive, athletic style of wrestling.

Q: What moves does a wrestler have to make to be standout star in the WWE?
A: Growing up in the business was one of my biggest breaks because I got my foot in the door. Other people have to pay money to learn how to wrestle and, a lot of times, get ripped off because they go to the wrong people. There aren’t a lot of people in the industry who know what they’re doing, let alone those who can actually teach. I think there are only 10 people, myself included, of course, who truly know what they’re doing. I feel sorry for people who spend money to learn how to wrestle. I didn’t have to to do that, so I didn’t pay any dues in that repsect. But I paid them in other ways, countless ways. I got handed an opportunity, but what I did with that was up to me. It takes something special to be a star in this business because there are a lot of guys who are in and out quickly. You forget about them while they’re still here. The real trick is to have longeivity in this industry. If you can stick it out for five or six years in this business, chances are you know what you’re doing.

Q: What advice did you get from your father (wrestler Cowboy Bob Orton) and grandfather (wrestler Bob Orton Sr) about what to do, and what not to do?
A: My dad always said: ‘Save your money.’ My grandpa said: ‘Watch out for the other guys.’ Everyone has a gun pointed at you. It’s whether you give them a bullet to use. I keep my mouth shut and I don’t get too personal with everybody because it’s competitive. The best friend I travel down the road with would love to see me break my leg because they’d have a chance to get my spot. It’s like any other sport. When someone gets hurt, injured, suspended, in trouble – it opens up opportunities for other people. It’s a shame, but it’s a very cut-throat business.

Q: Your mother was concerned about you choosing a wrestling career. What were her worries?
A: My mum was concerned I’d be gone from my family, like my dad was. And that I’d be living with the temptations that come with travel and having people adore, hate, love or despise you.

Q: Speaking of which – you married Samatha Speno in September. How’s that going?
A: I’ve been married two months and I’ve only been home seven nights with my wife. That sucks. My wife is a beautiful and strong woman. She puts up with a lot. She has got the full-time job of being a housewife. I’ve got the part-time job of busting my body so that we can live in the house we do, she can wear the $40,000 watch she wears and she can drive an Escalade.I’m busting my hump so that it can be possible.

Q: What was your perception of marriage, and does it measure up?
A: We were engaged for two years and lived together for three. I didn’t think anything would change, but it has. I have a new respect for her. Being able to call her wife is – alone – awesome. Being able to say: ‘I miss my wife,’ or: ‘I need to call my wife.’ She’s my wife. I’m responsible for her more than ever.

Q: You’ve said Triple H really understands the psychology of wrestling. What do you mean?
A: Triple H is the best at getting fans to react a certain way. He knows when it’s the right time to do certain things as far as getting fans to either jump down your throat or cheer for you. Triple H and The Undertaker are both good at it. And it’s ironic because I said they were too old for this business. I suppose with their ancient ages comes experience (laughs).

Q: What is the reality of your WWE life? What do you go through daily?
A: It’s rough and it’s tiring. I had three hours sleep last night, not because I chose to go out, but because that’s what we were allotted to have. We don’t have an off-season and we pay for our own rental cars, food and hotels. My expenses are well over $US100,000 ($113,500), sometimes double that. But I spend that so I can work here. They say we are self-employed but, at the same time, we have to be somewhere on time, and we have to dress a certain way. Obviously, I’m a bit of a rebel (Orton grins and tugs on the Gold’s Gym singlet he is wearing), but f— the dress code. It’s retarded. The travel sucks, injuries suck but you can’t complain because where else do you go to wrestle? Where else do you go to be on TV in tights, with knee pads and shark skin boots and have people go: `Yay!’? Nowhere! You don’t bitch because this is the only place to make money doing what we do.

Q: You’ve been a babyface (hero) and heel (villain) in your career. What are your observations about both sides?
A: Being a babyface sucks, unless you’re 300 pounds like Batista, or a character everbody wants to see live, like The Undertaker, or Hulk Hogan, who has charisma. Maybe it’s because I’m not good at it, or I’m a d—head in real life. It’s easy for me to go out there and be a pr-ck on the show because it’s me times 10. And even though you probably don’t like me anyway, give me five minutes, and I’ll make you not like me more. Being a heel is fun. It comes so natural.

Q: Your character has done some outrageous things. How did you approach the incident, before a match against Rey Mysterio, where you publicly said the late wrestler Eddie Guerrero is in hell?
A: I didn’t want to do it because I loved Eddie. Rey and I, even though we were fighting each other, were very, very close friends with Eddie. So we called Eddie’s wife and asked if it would be OK. It was heavy stuff. It got people to hate me and Eddie knew it would – God rest his soul. Later, Eddie’s wife said Eddie would have wanted me to do it, if it was good for business.

Q: What lessons has the WWE, or you, learned from the death of Chris Benoit? (Benoit, a former WWE champion killed his wife and son before hanging himself in June last year).
A: I guess you never know somebody like you think you do, that’s for sure. I never saw him killing his family or himself. Whatever his personal problems, his personal demons were – I can’t tell you, I don’t know. I don’t anyone will ever know except for God and Chris. But it was heavy enough to cause him to do what he did. The lesson is – you don’t know anybody like you think you do.

Q: From your vantage point, what is the magic of the WWE. What keeps it vibrant and relevant?
A: There is a constant rejuvenation every week, whether it’s a character or a storyline. There is always a change taking place, something to keep you watching – a cliffhanger to see who the mystery opponent is, or what the match stipulation will be. There is always that intrigue which Vince (McMahon, WWE CEO), the writers and the wrestlers are very good at doing. We create drama. And everybody wants to see a fight. People want to see you rip a shoulder from its socket, or get cut open, be hit with a chair, twist an ankle or break vertebrae. If somebody threatened to jump off a building right now, there would be a crowd at the bottom to watch him do it. It’s human nature People want to see f—ed up s—. So they watch RAW.