Home / Columns / Do Not Disturb! 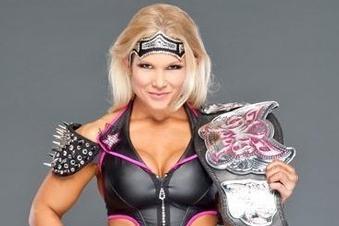 “Where’s Beth?” I asked my friends.  I mean, it was bad enough she wasn’t wrestling for the Divas title at SummerSlam, but now she wasn’t even dancing with Kevin Rudolph?  Was she not going to be on the show at all?!  Apparently not.  I left Staples Center pretty disappointed.

Then the following night on Raw the Divas participated in a #1 contender’s Battle Royal.  The match actually had some pretty good spots, but once again Beth Phoenix did not participate.  Beth hasn’t been on television a lot lately but this was particularly concerning, especially since she was shown on the pre-match graphic.

I thought about this again on my flight home.  I had a great time in Los Angeles but I was definitely disappointed that my favorite wrestler was MIA.  But then it hit me…why DOES Beth have to let her fans know what’s up?  Doesn’t she deserve some privacy?  I like privacy…shouldn’t she be given the same courtesy?

True story – when I checked into my LA hotel, the maid walked in on me 10 minutes later.  I hadn’t put the ‘Do Not Disturb’ tag on my door, so she knocked and walked right in.  Oops!  Thank goodness I was just standing there putting my clothes away.  It could have been a lot worse!   For her…it could have been a LOT worse.

That story made me think more about a person’s right to privacy in today’s day and age.  Do we really need to put a virtual ‘Do Not Disturb’ sign outside our door to ensure nobody just barges right in?  Technology has brought us closer than ever to our family, friends, and neighbors, which is a great thing (maybe the best example is military personnel being able to Skype with their loved ones.  I can’t imagine being stuck overseas, unable to communicate with my spouse and children.)

But technology has also brought us closer to celebrities, or so we think.  In some ways we now expect to know everything they do.  Where they go.  What projects they’re working on.  Who they’re dating.  How they’re feeling.  What kind of coffee they’re drinking.

There’s no question I feel more connected to Beth because I follow her on Twitter and can check her fan pages on Facebook.  I read the “dirt sheets” for the latest rumors.  Basically I can stay in touch with her entire community of fans.  Simply watching her matches on television isn’t enough anymore, which is the major difference from when I was growing up.

In the 80’s all we knew about wrestlers is what we saw of them on television.

Somewhere along the way that all changed, although I really don’t know if this makes me enjoy the product more than I used to.  I always knew the competition was scripted (well, I always “suspected” that was the case), but I’m talking more about the actual storylines, which are the real heartbeats of pro wrestling anyway.  I loved the whole Mega-Powers storyline and the love triangle with Miss Elizabeth.  Knowing Liz and Randy were married would have given the angle a “reality” I didn’t need.

“Jerry Lawler and Andy Kaufman” was so brilliant because you never REALLY knew how they felt about each other.  Everything between them sure looked real to me.  Today they would be involved in a “Twitter War” and we would be told every week that #KaufmanSucks is trending.

Did you always know the Hart Foundation and British Bulldogs came from Calgary and were basically all related to each other?  I sure didn’t back in 1986.  I remember watching WrestleMania III thinking “Bret and Jim are really in trouble today because the Bulldogs are pissed off!!”  Looking back, that was kind of fun.  It’s almost impossible to feel that true anxiety anymore.  CM Punk often breaks the “fourth wall” and makes his promos feel edgy, but we’re all in on the joke now, so it doesn’t have the impact it would have had 20 years ago.

Twitter has become a really interesting way for wrestlers to communicate.  In general I like it, but often times wrestlers mix their real persona with kayfabe storylines, and as a result I feel the impact of Twitter gets watered down.  Personally I would much rather Beth just tweet about stuff she finds interesting, or things she is doing, versus threatening to kick Alicia Fox around the ring.  Today’s fan knows that the storylines aren’t real, so I would think we would like Twitter to bring us closer to the actual person.

A few days later Beth tweeted she was OK, and that she was away dealing with a family issue.  At that point I was just happy to hear she was fine.  Sure part of me wanted to know “what” she was dealing with.  We’re conditioned to keep expecting more and more from celebrities.  But, obviously if she wanted us to know she would have told us.  I respect that.  Knowing that she is OK, well, that really should be good enough for me and all of her fans.

It was a nice surprise to see Beth back on Raw this past Monday.  I had expected her to be gone for a few more weeks so I was excited to see her.  The 6-Divas tag team match wasn’t anything special (Beth didn’t win, after all) but that really didn’t matter.  The important thing is that my favorite wrestler was back on television.

I’ll admit that after Raw I wanted to know “why Beth came back so much sooner than expected.”  I jumped in the Internet for a while, checked her Twitter page, but I didn’t really see any news updates about her return.  No big deal.  “Wanting” to find out is much better than “expecting” to find out.  Anyway, most of the news centered on the tragic situation involving Jerry Lawler, and rightfully so.

Jerry’s heart attack has shaken up the wrestling community, not only because The King is a legend, but also because it happened on live television.  Unfortunately tragedies strike wrestling all the time, but this one was so personal because we felt like part of the situation.  The WWE released statements about Jerry’s condition, and sites like LordsofPain.net did a nice job keeping wrestling fans updated.

This was a case where I felt we DID have a right to know what was going on.  It was obviously a serious situation so keeping Jerry’s fans, people that have cheered him for decades, in the dark would have been cruel.  All we really wanted to know was, “Is Jerry going to live?”  But once we knew he had been stabilized and was in recovery, I felt that was all we were entitled to know.  The rest belonged to Jerry’s family and close friends.

Jerry, everybody’s wishing you a speedy recovery.  Get well soon!

And welcome back to the ring, Beth.  I hope your tough times are behind you, whatever they may have been.

Related Itemsbeth phoenixhitting the ropesjerry lawlerwwe
← Previous Story OWW’s This Week in Wrestling – September 12, 2012
Next Story → AS I SEE IT – The Scariest Night in Wrestling History?