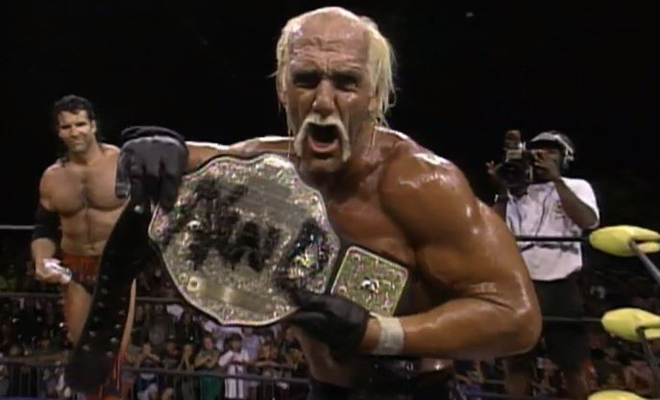 By Nick Schwartz of ftw.usatoday.com
Photo courtesy of WWE.com.

Beginning in 1995, rival wrestling companies World Wrestling Entertainment and World Championship Wrestling battled for television ratings, with the flagship shows of each promotion airing in the same time slot on Monday nights. The era, known as The Monday Night War, was one of the most exciting periods in the history of professional wrestling, and is the subject of a new 20-episode documentary airing Tuesday nights at 9 p.m. ET on the WWE Network. Hulk Hogan, who left the WWE in 1993 and became the face of the WCW, talked to For The Win about the creation of the New World Order, his shocking heel turn, and the events that led to WCW’s demise.

FTW: At Bash at the Beach 1996 you joined Scott Hall and Kevin Nash and cut that amazing promo in the ring after betraying the WCW, and fans pelted you with trash. Did you expect that sort of reaction?

Hogan: Yes, I knew it was going to be intense. When you tell people for 20 years that you love them, tell them to ‘train, say your prayers and eat your vitamins,’ believe in yourself and then all of a sudden you stab everybody in the back. I knew there was going to be a huge reaction.

FTW: Just before that pay-per-view, WCW started an 84-week streak of beating the WWE in Monday night ratings. During this period, did you ever think that the WCW would win the war, and WWE might disappear?

Hogan: I was praying to God that wouldn’t happen. I prayed to God that we would become the No. 1 wrestling show, and that WWE would thrive and stay the monster that they were. WCW might become a little bit [of a] bigger monster. I never wanted anybody to go away. I wanted two different companies so talent could have a choice where they could work and make big, big money.

FTW: Was there a moment for you where you felt WWE took control and turned the corner in the ratings battle?

Hogan: No, I just know that internally [in the WCW] things just started to fall apart. People got overconfident. I wasn’t [always] there…. When I was there every Monday, I had a really good feel for the direction and what [then WCW executive vice president] Eric [Bischoff] was doing, what the writers were doing. We got to the point where, I wasn’t part-time but I was there like every other Monday, and when I’d come back from being away for a week it was almost like the lunatics were running the asylum. The whole thing changed. There was a bunch of chiefs, and there should have been just one chief. I kind of saw things starting to lose direction.

FTW: What was it like backstage at a typical Nitro during this period? Were you guys always keeping an eye on Raw?

FTW: When you turned heel after being the No. 1 face in the business for decades, was that a liberating experience creatively? Did you enjoy it?

Hogan: I was kind of at the crossroads. Vince [McMahon] and I had parted ways a couple of years before, he had an opinion about Hulk Hogan and his longevity and I had a totally different opinion. I left to go to a TV show called Thunder in Paradise for a year or so, a year and a half. Then when Eric Bischoff and Ric Flair approached me about coming back to wrestling, I was ready. After the 14, 15, 16-hour days on the set of this action show I was producing with the Baywatch guys, I’d had enough.

When I went back to work, everything clicked. It just worked. I started out with the red and yellow, beat Flair for the belt, and then we get to a point where things flattened off after a couple months. The decision to turn heel was, we were either going to crash and burn or this is totally going to reignite the wrestling business, and it did.

FTW: So how did the nWo come together?

Hogan: Diamond Dallas Page was friends with Nash and Hall, and he told Eric that their contracts were up. So Eric talked to them and brought them in and you could feel the energy of these guys coming down from the big New York promotion. It was kind of like a shot of adrenaline, so we jumped right on it. Eric came up with the nWo idea, asked me if I wanted to join these guys, and I said ‘well I’ve always… always, always envisioned myself as a single performer. I never really saw myself as a group guy, but it worked out well because I was the leader of the nWo and still had the single main-event matches. The whole package worked really well.

FTW: Which character did you prefer, classic real American Hulk or Hollywood Hulk?

Hogan: Hollywood Hulk Hogan was really, really fun because it was exciting, it was proving the point that my run wasn’t over and the character wasn’t dead. But nothing beats that original ‘80s run from 1984 all the way through the ‘80s. That was just an electric time. Wrestling was the most talked about thing on every planet. Every celebrity and every president of every nation wanted to come to the matches.