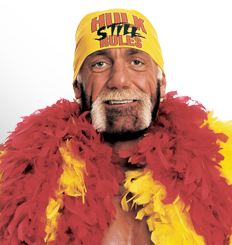 As we noted on PWInsider.com, Hulk Hogan and Eric Bischoff took part in a Q&A in Toronto over the weekend as part of the Fan Expo event. A fan asked Hogan what could finally be done to make TNA successful.

Hogan said that Eric Bischoff “needed to be given the keys to the car” and that, “somebody somewhere” needed to “drop all the resources we need like we had in the WWE and the WWF, whether it be cameras or money or vehicles or advertising” in order for TNA to work “in a perfect world.”

In asking around about what TNA’s response to the comments were, I was told that a number of people within the company were upset about the statement for several reasons and that there’s absolutely heat on the duo for even insinuating that the Carter family wasn’t giving TNA proper resources.

As one source noted, no matter how you feel about her, the comments can’t be seen as anything but a direct slap in the face to TNA President Dixie Carter, coming from her top paid talent, no less.

“Even if you agreed with Hulk, ” said one TNA wrestler that spoke under condition of anomynity, “the way it was said and the way it comes across in that video just completely disrespected Dixie, even if that’s not what he meant.”

Two, the reality is that to many in the company, Bischoff has been given the keys to the car. From the day he and Hogan came into the company, TNA management has acquiesced to their creative direction and ideas – whether it be talent that was brought in, the removal of the six-sided ring, the failure that came with moving Impact Wrestling to Mondays opposite Raw, leaving the Impact Zone and taking TNA on the road, etc. These were all ideas that came from the Bischoff/Hogan era that TNA agreed to under the auspice of growing the company.

The problem with all that is, as one source noted, there has been no growth in any facet of TNA’s domestic business since The Bischoff/Hogan regime began – not in live events, not in ratings, not in licensing – not in any one department or aspect of the promotion.

Instead, the company went on the road and didn’t see the estimated revenue that they believed would come with it, forcing them to restructure from the ground up and putting them into a position where they have to be the “evil company” letting Jesse Soresen go and have to be in a position where money is an issue re-signing their original poster boy, AJ Styles.

At the same time, TNA has paid Hogan a good salary and put Bischoff into a position where he became the conduit and liason between Spike and TNA, even before Dixie Carter, who created and cultivated the relationship between the two sides.

So, the pair continue to reap the rewards of being part of the company while others have lost their jobs, have had their deals restructured for less money and watch as the company continues to, at best, run on a treadmill and at worse, slide backwards.  To put it in layman’s terms, TNA is putting out more money to be exactly where they were, or worse, in comparison to before Bischoff/Hogan’s regime began.

So, for Hogan to say that TNA should just hand Bischoff a blank check and full power, well, you can imagine how much all that has endeared the duo inside the TNA offices this week, especially when everyone’s work and deals have been scrutinized closely in recent months.

A number of people noted that they would be waiting to see what the interaction between the duo and Dixie Carter would be at tonight’s taping in Cleveland, the first time Hogan has been at a TNA taping in a month.

“Hulk came across like he pretty much said that the company didn’t have anyone strong in charge and Eric was the savior,” said the TNA wrestler.  “Well, they’ve been here years and Eric hasn’t saved anyone yet.”