It will be a new night, new time and new channel when Impact Wrestling finally moves to AXS TV in October. In a press release, the company announced their TV programming will debut on the network on Tuesday’s at 8 p.m. ET starting on October 29.

“The incredible athleticism of our roster, dynamic characters and accomplished story-telling deliver must-see weekly programming that has captured the attention of professional wrestling fans around the world,” said Ed Nordholm, Chief Corporate Officer of Anthem Sports & Entertainment and president of IMPACT Wrestling. “We are excited to bring the best professional wrestling on television to AXS TV, long recognized as a premier destination for world class sports entertainment programming”

Prior to the big launch, the company will air all of their 2019 PPV events each Tuesday, leading up to a preview show on October 22. 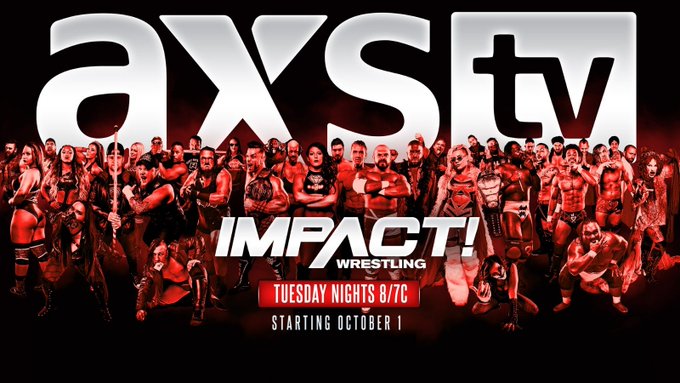 100 people are talking about this

This news comes after Anthem Sports and Entertainment announced that it purchased a majority interest of AXS TV. Longtime comedian and actor Steve Harvey joined Anthem as an investor and strategic partner through his Steve Harvey Global production company. Harvey now has a seat on the Anthem board.

“Impact Wrestling is a perfect fit for AXS TV’s slate of live sporting events and combat sports content,” said Nordholm. “The newest addition to our growing portfolio of media assets, AXS TV’s audience perfectly aligns with our passionate Impact Wrestling fan base, and this move increases the reach for our weekly program with distribution in over 50 million homes.

Currently, Impact Wrestling is being shown on Pursuit. Nothing has been announced regarding a change in distribution in programming, especially with the online platform Twitch.