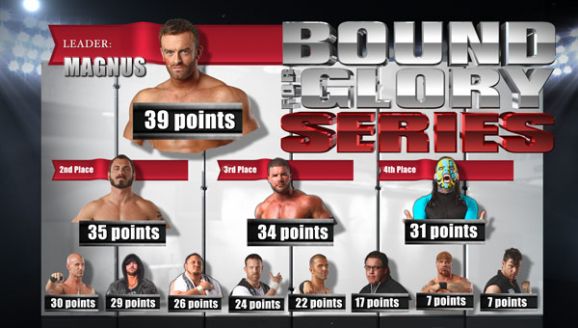 8/8/13 IMPACT WRESTLING Live! Update
– Magnus took a 10 point dive in points when Bobby Roode decided to play dirty with the rules and take a chair to Magnus’ opponent, Mr. Anderson.  The chair shot cost a surprised Magnus 10 points and closed the gap between 1st place and the rest of the pack.
– Jeff Hardy picked up a 7 point pinfall win against Samoa Joe.
– They both put up a great fight – but in the end, their friendship yielded a mutual-respect draw.  2 points for each between Daniels and Kazarian