ASSASSIN: Man Behind the Mask 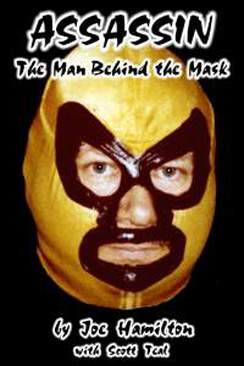 The Man Behind the Mask

by Joe Hamilton with Scott Teal

Description: Once again Scott Teal helps another wrestling legend tell his story without the shackles of the WWE breathing down their backs to recreate history in the WWE vision. Joe Hamilton tells his story of his humble beginnings and how he and his brother Larry rose through the ranks of professional wrestling with some humorous and scary details that happened along the way. Joe tells in detail of working MSG very early in his career as he and Larry main evented the most famous wrestling arena in America in the 1950’s. Joe tells how it wasn’t always big money as he worked the Kansas City circut while starting out. Joe is a rarity in the sport as his wife spent decades at home while Joewas on the road and stuck with him. Joe spends most of the book telling of his travels from territory to Territory as part of the Assassin Tag Team along with Tom Renesto. Their long running feud with the Kentuckians is well documented. Joe is very firm in his belief that they were the top drawing card in whatever promotion they went to. A good detail on the Georgia promotion battle in the early 1970’s is covered here. Joe also spends time telling of his own independent promotion and how hard it is to make a go of such an endevor. Joe takes a chapter and lets you know how he feels about a large number of wrestlers and managers and promoters and doesn’t pull the punches.

Rating: 9 out of 10 because Scott once again gets the most history out of the wrestler. The stories keep the reader entertained throughout. At times Joe’s ego comes to the forefront and the reader must make up his/her own mind what they think the facts are. I highly reccomend this book for any fan of tag team wrestling, Southern wrestling, masked wrestlers or wrestling history.

The Man Behind the Mask

by Joe Hamilton with Scott Teal

Legacy. The word legacy is used a lot in professional sports, especially in professional wrestling. When one reads an autobiography, we typically think of it as reading about the legacy of the superstars we admire and have enjoyed watching throughout the years. Many times books by professional wrestlers are spit out at an alarming rate, leading one to seriously consider their purchase of such books, one needs only to look at the printing schedule of the WWE at one time, to see that legacy is an almost meaningless term in their vocabulary and most certainly is in regards to the majority of the books they’ve printed. However, Mr. Scott Teal and Crowbar Press have set a new standard for professional wrestling publishing and allowing fans to experience the legacies of many superstars firsthand.

One of the paramount ways is with the publication of Assassin: The Man Behind The Mask. For many fans, the name Assassin might not ring a bell, many middle aged WCW fans will remember him as the short lived manager of Paul Orndorff & Paul Roma, collectively “Pretty Wonderful” and also being inducted into the WCW Hall of Fame. So if you are younger fan, I suggest you do a simple web search or video search for the man Jody Hamilton, known as The Assassin and also as The Flame. Trust me my friends, you will thank me that you did.

Some wrestling books have a tendency to go on with a lot of nothing, there is very little of substance in many of them. Many talk about contemporary issues and make the books irrelevant within months of their printing, this is not so with Assassin: The Man Behind the Mask. This is so much more than an autobiography. It could actually be construed as three books in one. On one hand you have a magnificent collection of photographs and programs from nearly every era in professional wrestling courtesy of Chuck Thornton’s vast collection. The fact that many of these photos still exist is amazing and adds an air of depth to the historical significance of the book. Secondly, you are privy to the inner thoughts and insights into the business of professional wrestling of a man who can say “been there, done that” in every instance. Last, but definitely not least, you have the story of Jody Hamilton the wrestler and the man.

Reading about Mr. Hamilton’s early life, I feel that had he achieved just a normal existence it would have been a great accomplishment. Many of us hear stories of coming from a rough upbringing, but this man not only overcame adversity, he thrived from the experience. The old adage “what doesn’t kill us makes us stronger” is never more apparent than in the life story of Jody Hamilton. Many people become depressed or bitter or derelict at life, love, and responsibility from early life experiences like Mr. Hamilton had to live through, but one thing that The Assassin teaches us is that we can either choose to be lead by our fears or we can draw on our inner strength and become what our passions endeavor us to become.

Many readers will be amazed to learn that Mr. Hamilton is the youngest person to ever headline Madison Square Garden, a feat that still stands to this day. With a career like “Silent” Joe Hamilton, many people would’ve simply rested on their laurels and called it a day, but not Jody Hamilton. Many fans will not realize the consistent reinvention that Mr. Hamilton went through in his professional career. From The Assassins, The Bolos, to The Flame and that’s just his in ring career. Jody Hamilton got over and stayed over wherever he went, whenever he went. This man is a testament that skill, passion, and determination are always our greatest allies and that actions speak louder than words. In this book never once does Mr. Hamilton whine, moan, or complain about anything that happened to him, he takes it all in, in typical Assassin style and destroys any doubters through his abilities and his mental acumen.

I won’t give too much away, but Jody Hamilton has lived enough experience to cover several lifetimes, so I am greatly looking forward to a suspected follow up, which Mr. Hamilton alluded to on my final radio broadcast (www.myvirtualbc.com for the online archived version of the show). Mr. Scott Teal has also outdone himself, and allowed Mr. Hamilton’s story to emerge as though it were being told first hand, in that all too familiar gravely Assassin voice. My advice to wrestling fans young and old regarding this book, definitely pick it up. If you have been jaded by bios of kids without enough life experience to warrant a book, or the market of jaded and angry former wrestlers, then Assassin: The Man Behind The Mask is a breath of fresh air and will reinvigorate your interest in wrestling biographies. Moderately priced at $19.95 and available at www.1wrestlinglegends.com Assassin: The Man Behind The Mask is far more entertaining than a wrestling pay per view and half the cost. It takes you back in time not only to a world of great professional wrestling, but also shows the true grit and determination of a man, who although he portrayed a villain, should be considered nothing less than a real life hero.