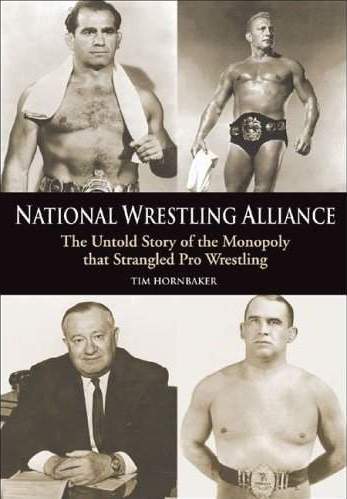 The highly anticipated book, National Wrestling Alliance: The Untold Story of the Monopoly That Strangled Pro Wrestling, which chronicles the turbulent history of the National Wrestling Alliance, has finally hit the book shelves. There seems to be dozens of books out there focusing on more modern topics like WWE and various wrestlers going as far back as the early 1970s. The pre-70s era, which was heavily featured in this book, is truly uncharted waters to the active wrestling book marketÂ – until now.

The world of professional wrestling was a much different place in the early 1900s, with an entirely different set of rules and the entire sport as a whole was viewed differently by spectators as well as the grapplers themselves. The promoters, ironically, pretty much stayed the same! This fascinating story is an extremely in-depth well-researched printed documentary shining a frothy spotlight on a generally misunderstood era of professional wrestling. For a young person like myself (aged 29), whose parents were in diapers for the time period featured in this book, it was one wrestling lesson after another as I journeyed though the pages of this 372 page historical novel.

Author Tim Hornbaker took the time to thoroughly research his subject and managed to present the story from several different perspectives. Each chapter seemed to add a new flavor to the enormous melting pot that would eventually end up becoming the tale of the one true governing faction of pro-wrestling known as the NWA. Other chapters were dedicated to some of the more important figures involved in the creation and maintenence of the NWA; Lou Thesz, Sam Muchnick, Ed “Strangler” Lewis, Fred Kohler, and Joe “Toots” Mondt are all prominently featured in properly organized mini-biographies.

This book is by no means a biased glorification of the NWA. Hornbaker expounds upon many factors within the Alliance, as well as outside factors, that contributed to the rise, and the eventual fall, of the National Wrestling Alliance. Great detail is provided about several bitter court battles fought internally as well as externally over the years including an aggressive investigations by the U.S. Government in the 50’s that almost shut down the entire operation for good.

One of the NWA’s most respectable traits was its insistence that their champions be held in the highest esteem. The NWA World Heavyweight wrestling title was guaranteed to sell out any building in whatever city the champion happen to be in on any given night. The legendary Lou Thesz was the key figure for many years, entrusted by the NWA office with the duty of carrying the torch for the Alliance. Whomever the champion, be it Thesz, Dick Hutton, Gene Kiniski, Dory Funk Jr., Jack Brisco or somebody else, NWA members were well aware that the champion was ready, willing, and able to shoot on any challenger who decided to go into business for themselves by drifting from the pre-approved script. It seemed as though everything that happened in the ring was based on honor, but the office was a different story.

Another intriguing chapter covers the expansion of Capitol Wrestling in the Northeast, headed by the combined forces of Vincent J. McMahon and Toots Mondt. Additional chapters focus on the lineage of the NWA World Heavyweight championship and all of its title holders over the many decades. The book also deals with the more recent history of the NWA and goes all the way up to 2005, acknowledging TNA (Total Nonstop Action) during the final chapter.

I was astounded by the amount of research put into this project by author Tim Hornbaker. It has to be the most thoroughly organized book about wrestling that I have yet to come across. I can only imagine the years of tireless exploration and study was involved with piecing together the history of such a tangled subject that covers nearly of a century of material scattered all over the globe. So Hornbaker’s tireless dedication alone has earned a thumbs-up from me. This book comes highly recommended by me. Thank you.

National Wrestling Alliance: The Untold Story of the Monopoly That Strangled Pro Wrestling is available at bookstores everywhere or at various online sources such as Amazon.com; for more information you can visit the publisher’s website at www.ecwpress.com