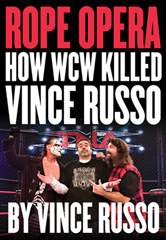 Ten years ago the wrestling landscape was absolutely amazing. You had three different promotions running America; Extreme Championship Wrestling, the then called World Wrestling Federation and World Championship Wrestling. Just think about that, 3 promotions running all over America with millions of fans. Each had a national television program (WCW on TNT/TBS, WWE on USA & UPN and ECW on TNN.) One man had a hand in the creative direction of two of those companies over the past years; you probably know his name from the people who chant it preceded by the word FIRE. His name is Vince Russo and he is back to talk about his jump from WWF to WCW in his new book ROPE OPERA: HOW WCW KILLED VINCE RUSSO ($19.95, ECW Press, 240pp.)

When we last left our hero Mr. Russo in his first book FORGIVEN: ONE MAN’S JOURNEY FROM SELF-GLORIFICATION TO SANCTIFICATION (also available from ECW Press), he was working for WWF with his writing partner (current in TNA Wrestling as well) Ed Ferrera. WWF was gaining traction on WCW which had destroyed WWF in the ratings for near 90 weeks straight (find Eric Bischoff’s book for the other side of things) when a funny thing happened to Russo & Ferrera. Vince McMahon dropped what is now called Friday Night Smackdown in their laps. Already physically and mentally drained from their schedule of writing and travelling, Russo & Ferrera made some demands for the new show. During the negotiating Russo got the shock of a lifetime when he told McMahon he wanted to move his family closer to his wife’s family since he hardly saw them and it would be good for them. McMahon said, “With the money you’re asking for why don’t you just go ahead and hire a nanny.”  According to Russo that was all he needed to make the call and become the new writer of WCW after Bischoff had been sent home (like I said find Bischoff’s book.)

This book covers everything you wanted to know about Vince’s time in WCW and the hell it created on him mentally and physically (hence the title of the book.) He covers the backstage politicking from day one he and Ferrera were up against, the Hulk Hogan-Bash at the Beach “shoot”, plus dealing with established stars like Sting, Ric Flair, Lex Luger, Booker T, Scott Steiner, Kevin Nash, Scot Hall and Bill Goldberg. Russo holds what appears to be nothing back in how he felt when he was told after only THREE months the plug was being pulled on his work and he would have to join a booking committee.  He is also honest in people’s assertion that he alone “killed” WCW.  Interesting parts were to read how he handled the closing of WCW and a one –time trip to WWE to see McMahon and how creative was handled in his absence. Lastly Russo covers the tenure with his on and off employer since 2002, TNA Wrestling and his friendship with Jeff Jarrett and his late wife Jill. In case you’re dying to know the book ends in October 2009 when TNA announced they were bringing in Hulk Hogan and Eric Bischoff.

Many people probably are expecting me to hate this book since I covered TNA from 2002-2007 and I have never been a fan of Russo’s wrestling writing. But its hard to hate this book because to be honest he is better at writing a book then he is writing a wrestling program. The only problem with this book and I feel with FORGIVEN is Russo’s embracing of religion. I am not religious but reading those two books back to back (plus watching a shoot interview with Russo/Ferrera done by Wade Keller I recommend from www.bvdvd.com) I kept looking around my seat expecting a collection plate in front of me. I have no issue with one’s religion, but don’t shove them down my throat.  I believe Mr. Russo has a fan page on www.facebook.com that you can chat with him, just search his name. Thanks for reading as I’m sure Russo and TNA won’t be.

ROPE OPERA is available through www.ecwpress.com and retailers nationwide.