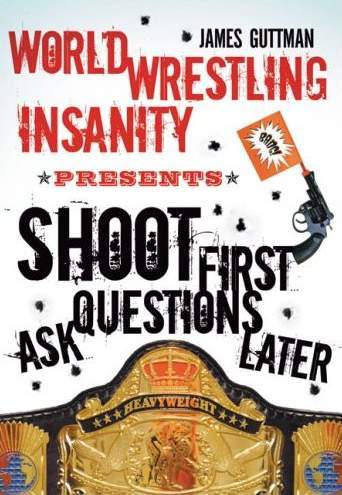 Shoot First… Ask Questions Later, is the catchy name for the latest book written by the King of internet-based wrestling interviews, the emperor of WWE parody, Mr. Insanity personified, my friend and yours, the one and only…. JAMES GUTTMAN. Okay, so I did that to make the point that none of James Guttman’s introductions are as cheesy as mine. I am the cheesiest. In fact, Guttman’s interview style is extremely pleasant and makes him one of the Internet wrestling community’s greatest assets. Oh man, I should have used that in my big introduction, too.

Okay, let’s get down to business. Nobody knows better than me how hard it is to come up with a concept with enough strength to suck in the attention-span lacking public – especially on planet wrestling. When James Guttman started doing interviews with professional wrestlers, he was jumping into a pretty crowded pond of enthusiastic fish (and frogs). Guttman had something special that few others possessed, a good concept. His audio program quickly rose to the top, all thanks to intriguing interviews with an extremely wide variety of characters from wrestling’s past, present, and future. While everyone was jumping on the “WWE Sucks!” bandwagon, Guttman chose to elaborate on his perspective and twist it into something of a parody. Guttman made lemonade out of pig shit. Congratulations.

James took the insanity to whole new level, reaching out to his heroes from the squared circle to shed some light on why the world of professional wrestling had gone absolutely crazy. After over a hundred interviews, Guttman has refined his technique and gained a whole new outlook on the true nature of the wrestling business. His goal was not only to converse with famous wrestlers, but to reduce the gap between the fans and the wrestlers and do it in a safe environment. He has done that with remarkable success.

Mr. Guttman wrote his first book, World Wrestling Insanity, shortly after his website by the same name began to take off. This second book tells us that James is all grown up. A little smarter, a lot wiser, but still proud of how far he has come and what he has achieved. He talks in depth about how he ended up getting involved in the life of a wrestling insider. He also talks about many of the great interviews he has conducted, going in depth on what he was thinking, what he learned, and shedding some light on all situations pertaining to professional wrestling.

For $5 a month, you can sign up at www.ClubWWI.com and listen to tons of audio based interviews from over the years featuring a virtual who’s who of wrestling personalities. Anybody who is anybody has been on the phone with James Guttman, and if they haven’t then they probably will be soon.

For more information on how to purchase this book and others like it, go to www.ecwpress.com – or you can show your support by visiting the very entertaining website www.worldwrestlinginsanity.com

Just when you thought World Wrestling Insanity author James Guttman was taken away in a straight jacket by the WWE political correctness police he returns with a new book. This one is called World Wrestling Insanity presents: Shoot First…And Ask Questions Later (ECW Press, 216pp, $19.95). Thanks to the success of his debut book and the website he runs of the same name, Mr. Guttman created an internet based radio show called Radio Free Insanity with one goal in mind, interview former and current professional wrestlers in an uncensored environment (currently posted on the site is former WWE/ECW star Nunzio.) In addition he created an archive site called www.ClubWWI.com which is a pay service; I believe $4.99 a month. In addition to Mr. Guttman and friends; several wrestlers like D’Lo Brown, Bull Buchanan, Lisa “Ivory” Moretti, Kevin Kelly and Orlando Jordan contributed columns or their own internet based broadcasts.

Like the Between the Ropes radio show based out of Orlando, Florida did a few years ago; this book is a collection using snippets of the more than 100 interviews Mr. Guttman has conducted with legends like Nick Bockwinkel, Dory Funk Jr. Bruno Sammartino, Jerry “the King” Lawler, Harley Race as well as current stars like AJ Styles, Rhino and Christian Cage to name a few. Plus mix in executives and creative staff like Les Thatcher, Eric Bischoff and Tod Gordon and you have some great stories to read. Current Florida Championship Wrestling (WWE Developmental) head trainer and also a WWI.com contributor Dr. Tom Pritchard gives the introduction and he doesn’t surprise this reviewer when he reveals that he is an asshole who had no clue why he was asked to do the introduction.

As someone who has been conducting interviews since 2001 (insert shameless plug for http://alanwojcik.com here), I was interested to read how someone else researches their subjects, the legwork in getting them to sit down (Mr. Guttman chased some for years like Bobby Heenan) and the process involved in getting it to the internet for broadcast. I must commend him on the wide variety of interview subjects. Like the people mentioned above plus Kevin Nash, Damien Demento, Corporal Kirschner, “the Missing Link” Dewey Robertson, Bad News Allen, Scott Steiner and extra kudos for surviving an interview with former Four Horseman member Ole Anderson who takes Guttman to the proverbial woodshed, for what reason I have no idea and I read the book. I will not spoil the surprises that lay inside the book but I will say Mr. Guttman will never be invited to the McMahon Christmas party but I doubt he cares as his web show guest list gets bigger and better each week.

You can buy this book in major retailers or online at www.ecwpress.com or www.worldwrestlinginsanity.com