The WrestleCrap Book of Lists 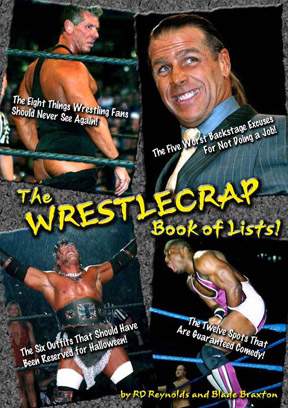 The WrestleCrap Book of Lists

From the makers of the original WrestleCrap book, inspired the universally popular website by the same name, glorifying the absolute worst that professional wrestling has to offer, comes the highly anticipated sequel – the knee-slapping WrestleCrap Book of Lists!

This is quite a unique publication.  Make sure you bring your sense of humor, as you get filled in on such topics as;  Wrestling nick-names that didn’t catch on, Most stereotypical wrestlers, Top wrestlers from outer space, Greatest wrestling perms of all-time, Most offensively dressed wrestlers, Worst acronyms, Examples of how wrestling and religion don’t mix, Wrestlers who should have a reality show, Top wrestling mug-shots, Excuses for not doing a job, Worst victory speeches in wrestling history, Wrestling-themed restaurants, Greatest wrestling DVD’s to never hit the store shelves, and that is just the tip of the proverbial iceberg.  Each list is hilarious in its own special way.  I’m not exactly sure how many lists are featured in this book, but there is plenty for everybody!

When you pick up this book, and you WILL pick up this book (right?), be sure to put it directly in the bathroom – where it belongs!  Let me be clear, because that sounds like the start of a BAD review!  I really enjoyed reading this book, but it was certainly not intended to be read all at once.  Do yourself a favor and hide within arm’s length of your toilet so you can pick it up and read a couple of pages while you’re dropping the kids off at the pool.   I think there would no better tribute to the writers of the book than to read it while you’re sitting on the crapper.  I’m sorry, but I’m cracking myself up as I typed those words.  What I’m trying to suggest is that you slowly devour this book a little bit at a time.  Pick it up, entertain yourself with a couple of comical lists, and then put the book down again.   It was meant to be a fun book for both the readers and the writers.

Would you expect anything less from the two disturbed gentlemen who are proud of the fact that they purchased the Katie Vick mannequin at a WWE auction?  That’s crap, but we love it!