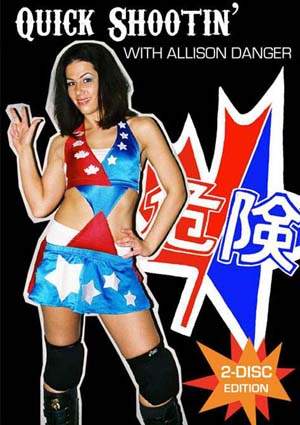 Let me tell you a couple of the reasons why I like Allison Danger. She’s Canadian, and I’m Canadian too. She’s cool, and I’m sorta cool. She’s pretty, and I like pretty girls. She’s an awesome wrestler, and I respect awesome wrestlers. She respects professional wrestling as an art form, and I respect that she does. And she is Steve Corino’s sister, and I’m a mark for Steve Corino!

Okay before this turns into a love letter, I’m going to tell you all about this new 2-disc DVD release that was sent to me by Rob O’Brien at Strong Style Productions. The interview was shot in Dublin, Ireland on 1/19 and 1/20, and the moderator had an Irish accent.

Allison Danger opens up and gives viewers her thoughts on many topics, such as sexual harassment in pro-wrestling, the current crop of WWE Divas, if she would accept a WWE or TNA contract, who she wants to wrestle at a WrestleMania, hilarious answer to the question “who do you wanna wrestle (dead or alive)?”, her exit strategy from pro-wrestling, experiences with veteran wrestlers, who WWE should take and who WWE dropped the ball with, favorite opponents, thoughts on Sara Del Rey, her long inventory of injuries, opinions on websites that offer custom matches, and a whole lot more. There is an long exciting game of name association with pretty much every member of the SHIMMER roster, then most of the WWE Divas (past and present) and TNA Knockouts, followed by some random independent girl wrestlers, and finally a variety of male wrestlers across the globe.

One of the highlights of the video featured Allison Danger providing an amazing road story involving former ROH star and current WWE star, C.M. Punk, which will have you laughing out loud. There is a lot of cheesy non-wrestling questions but full of candid answers from one of the best and nicest female professional wrestlers, Allison Danger.

For more information, or to buy “Quick Shootin’ With Allison Danger,” visit www.strongstyleproductions.com ..