Last Call with Raven and the Sandman 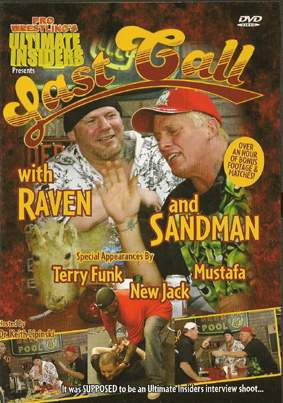 Pro Wrestling Ultimate Insiders were onto something with they came up with the “Last Call” concept of having real life bar-tender and supreme funnyman Dr. Keith Lipinski host a shoot interview from behind the bar, serving drinks to his patrons while throwing out questions.

It started out just fine with Raven and Sandman sharing some hilarious stories and reliving some of the good times they had as they made their journey through the world of professional wrestling. Raven and Sandman have a good chemistry, and are obviously really good pals in real life. Raven clings to his bottle of water, while Sandman accepts drink after drink from Lipinski – loosening his senses with each and every gulp of fluid. After a little while, the lovable Terry Funk made a brief cameo behind the bar. Funk asked Raven and Sandman a few questions and provided some hilarious anecdotes from his own legendary career. Both Raven and Sandman were clearly in awe of the legend standing before them, especially Raven. Funk’s appearance on screen was too short.

Eventually the volume was turned up when everybody’s favorite gangsta, New Jack, showed up with former tag team partner Mustafa – whom he had reunited with at a recent California independent wrestling event. New Jack went on a one hour rant, yelling and screaming about things that are important to him, and basically dominated the rest of the program. A lot of people love New Jack, but this really ruined it for me. I was absorbed in the Raven-Sandman dynamic, but now they were literally pushed to the background while New Jack hogged the camera. Mustafa sat closest to the camera and barely spoke a word the entire time he was there. I think the directors were trying to figure out a way to get the Gangstas off the set without pissing New Jack off too much. New Jack simply would not leave. Eventually he did leave, but then found his way back onto the set again. New Jack got the last word, as the credits were rolling down the screen.

This interview was shot just before the infamous XPW “Cold Day in Hell” event earlier this year, so it was convenient that all five of these stars were in the same place at the same time. I’m a huge mark for Dr. Keith Lipinski, as he is truly one of the funniest guys on the planet – but he was stuck in the shadows here and was not able offer much of his unique brand of humor.

The DVD was frosted with some bonus material, including about an hour of wrestling matches taped for the infamous XPW promotion. The first match is a very sick encounter between Shane Douglas and an over-the-hill Terry Funk. If you like blood and gore then you’ll love this match, because Funk suffered a disgusting gash on his arm which resulted in the muscle in his forearm literally hanging out of the skin – and he continued wrestling for 10 minutes! Also featured are the following matches; The Sandman vs. Supreme, Raven vs. Vic Grimes, New Jack vs. Kaos, J.N. vs. Chronic (ft. Mustafa), and New Jack vs. The Messiah. It’s XPW, so you know what to expect when you view these matches.

Pro Wrestling Ultimate Insider’s is produced by Big Vision Entertainment. You can check out more information on this DVD, as well as many other great BVE DVD’s at www.BVDVD.com

Raven & Sandman walk into a bar…no that’s not the beginning of a joke. Big Vision Entertainment brought these two extreme wrestling stars together in a bar setting for the next chapter in the Ultimate Insiders series. Like previous editions it is hosted by Dr. Keith Lipinski and the shoot is long and interesting. Actually interesting doesn’t cover it. This DVD was filmed the night before the XPW Cold Day In Hell reunion show so the alcohol flowed as Lipinski tries (operative word being tries) to conduct a shoot with these two men who have worked for WWE, WCW, ECW and TNA. That was until the event is crashed ten minutes in by fellow hardcore stars Terry Funk, New Jack & Mustafa. What ensues next is not to be missed if you’re fans of these five men. I really tried to be impartial watching this DVD but….

Let me say I am not a fan of New Jack, Sandman or Mustafa and this DVD didn’t make me feel any different about them. I have always found Raven to be a smart man trapped around dumb people. This DVD is a perfect example, he has great stories to tell mixed in with some comedy. But the DVD gets bogged down by New Jack who cannot stop apologizing to Terry Funk for hijacking a retirement speech from years gone by. The worst part is Funk doesn’t stick around long enough to contribute anything of substance. Anytime it seems Lipinski is going to get control or ask a question, New Jack or Sandman go on a rant about their drug and alcohol days in ECW. To be honest this interview plays like an episode of Seinfeld, the show about nothing as the DVD board game advertizes. The disc is saved by some XPW matches with Funk vs. Shane Douglas, Supreme vs. Sandman, Supreme vs. Raven, Kaos vs. New Jack plus the entire retirement speech New Jack won’t stop apologizing for.

Ultimate Insiders presents Last Call with Raven & Sandman is on sale at retailers nationwide or through www.bvdvd.com for $14.95