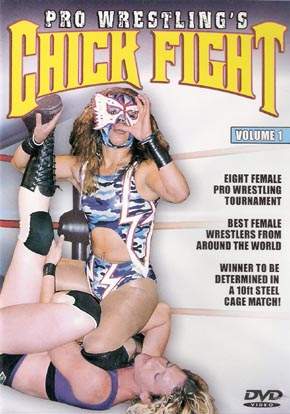 The legend of ChickFight has its grass roots firmly planted in the renowned “Garage” in Hayward, California – the home of California-based independent promotion All-Pro Wrestling. The ChickFight brand name might have started small, but within a few short years it would grow into an international sensation. ChickFight tournaments would be held every couple of months, and feature talent from all over the United States, Japan, Mexico, and the United Kingdom. With tons of Fighting Spirit, the girls of ChickFight would do their part to help revolutionize women’s professional wrestling in the Mid-to-Late 2000s.

The first match of the opening round featured an import from Mexico known as Princess Sugey (pronounced “Sue-Hey”) taking on a fake Canadian known as Candice LeRae. Just because you wear the Maple Leaf doesn’t make you Canadian! The Butterfly-mask wearing Princess Sugey beat the living hell out of LeRae for about ten minutes before finishing her off with a disturbing submission hold. Candice refused to give up, choosing instead to give up by passing out. The second match was between local favorite “Future Legend” Cheerleader Melissa and Japanese import Nene Kimura. These two clearly had some pre-existing heat with each other, stemming from some matches they had in APW. This was a little more evenly matched, with both fighters getting their fair share of kicks and roaring forearms! Melissa advanced to the final four with a similar submission hold that Princess Sugey used in the previous match. Match number three featured Ohio-native Hailey Hatred wrestling one of my personal favorites, Nikki Roxx! The match went back and forth like a carnival ride for about ten minutes before the tape suddenly cut right in the middle of what I can only assume was the final pinfall. A bit of poor editing, but for the first attempt at DVD production, you can’t hold too much against them as long as they learn from their mistakes and implement new features in future releases. The final match of the first round was between Southern wrestler Christie Ricci and California’s own Tiffany. There are way too many Tiffany’s in the wrestling industry! She sort of looks like Francine, except she’s young, and in incredible shape – and she knows how to wrestle. I really didn’t know who was going to win until the lovely Christie Ricci scored a surprise bridging pinfall to move on to the semi-finals.

The second round began with Princess Sugey giving up considerable height against the best ass in the wrestling business, Nikki Frickin’ Roxx! She’s not really called that, I just made it up. This was the most brutal match of the first two rounds, as the girls resorted to repeatedly throwing each other face-first into the unforgiving steel garage door. Then they started exchanging stiff slaps and chops that made me cringe uncontrollably. Show me your battle scars. Princess Sugey finally managed to put Nikki Roxx down for the count to secure a spot in the Finals, which by the way will be fought inside of a steel cage. The next semi-final match featured the San Francisco treat, Cheerleader Melissa, against Hendersonville, Tennessee resident Christie Ricci. Not to get all “Queer Eye” on my readers, but Melissa was wearing the all-time greatest outfit in professional wrestling, which is amazing, because it was brown. Christie worked over Melissa’s injured back, while Melissa methodically punished Ricci’s leg. Melissa focused on her opponent’s leg and eventually submitted her with the Cloverleaf to advance to the steel cage finale, which would take place the following night.

The tournament came down to Princess Sugey (who was 4-1 in steel cage matches) against Cheerleader Melissa (who was stepping into a steel cage for the first time). How often do you get to see a serious women’s wrestling match inside of a steel cage? The Garage in Hayward is kind of an awkward venue for a steel cage match. At first they kept saying that you had to win by pinfall or submission inside the cage, but that changed when Princess Sugey crawled out the door and touched the floor to be declared the winner of the 1st ever ChickFight Tournament!!!

Final Thoughts: It would be easy to nit-pick at the production quality of this DVD. The main menu is really well done, but the camera work leaves a lot of room for improvement. The Garage is a tough venue to shoot footage in. There was A LOT of amazing talent involved in this tournament, and all the girls should be praised for their effort. There was such a unique mixture of styles and each participant added their own personal touch to the final product.